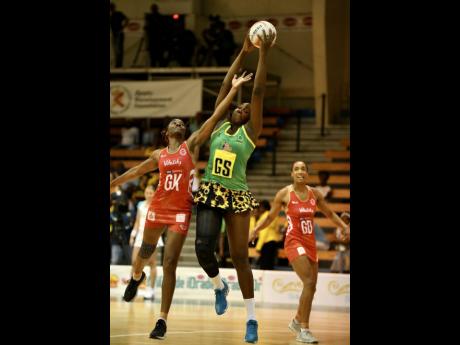 Having defeated South Africa in their opening match of the four-nation Vitality Netball Nations Cup, Sunshine Girls captain Jhaniele Fowler said the Jamaicans are pumped up ahead of tomorrow’s clash against world champions New Zealand in Birmingham, England.

The Sunshine Girls, who are ranked fourth in the world, turned back the challenge of the world’s number five ranked South Africans, 59-54 in Nottingham, England, on Sunday.

Tomorrow’s clash is a top-of-the-table encounter between the two sides and victory for either team will guarantee them a spot in Sunday’s final.

Fowler told The Gleaner from the team’s base in Birmingham yesterday, that the Jamaicans are quietly confident ahead of this game.

“A lot is at stake and so we want to come out victorious,” said Fowler. “We are feeling confident and positive about ourselves and our processes that we are trusting in and we are ready to go against New Zealand.”

“We have gained a lot of confidence from that victory (over South Africa) because that was a game that we wanted to right some wrongs and so we just want to push forward to other games,” added Fowler in reference to the Jamaicans’ loss to South Africa at last year’s Netball World Cup and their overall disappointment at that championship, where they finished fifth.

Like the Jamaicans, the New Zealanders got off to a winning start, recording a 64-48 victory over hosts England in their opening match.

Fowler, who is rated as the best goal shooter in the world, underlined that they will be going all out for victory and are bracing for a tough challenge from the New Zealand outfit.

“We are looking forward to it because we know that it is going to be a challenge just like every game,” Fowler said.

“New Zealand are the world champions at the moment and so we know that we have to be very strong in all departments going up against them,” she further stated.

Fowler, on Sunday produced an excellent performance in the Sunshine Girls’ win, netting 46 goals from 47 attempts.

She noted that she has been putting in a lot of work in the shooting circle and is now reaping the rewards from it.

“I am feeling really good about it because I have been putting in a lot of work and so it is good to see it paying off,” said Fowler.

The skipper will be hoping to register another strong performance tomorrow and lead her team to what would be a statement win against the New Zealanders.