Knight-Wisdom wary of complacency this season 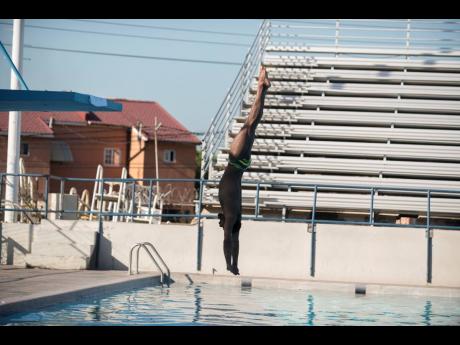 Olympian Yona Knight-Wisdom says that he will be targeting consistency in his performances as he officially gets his 2020 season under way at the first meet of the FINA Diving Grand Prix in Madrid, Spain, tomorrow.

The Pan American Games 1m springboard diving silver medallist will open the European circuit competing in the 3m springboard event. With the main goal of qualifying for the Tokyo Olympics in July the priority, Knight-Wisdom says that he is taking a balanced approach to his expectations for the meet, targeting consistency as he hopes to avoid peaking too early.

“A good performance can certainly help to give me a boost for the rest of the year, but equally a good performance can cause complacency which I certainly don’t want,” he told The Gleaner. “So I’m not really too bothered by the result. I’d like to hit the score that I’ve been aiming for over the last couple of years, over 410, and just go through the correct processes regardless of any hurdles put in my way.”

His first competition for 2020 was the British National Championships in Plymouth, England, in late January, where he placed second in the 1m springboard and fifth in the 3m springboard events. Knight-Wisdom said despite the short turnaround from his recent trip to Jamaica, his results have assured him of his ability to execute his dives regardless of circumstances.

“Competing at the British Championships straight off the back of my trip to Jamaica gave me a true indication of the areas that I’m feeling pretty comfortable on, so my coach and I got straight to work on those areas which need work when we got home to get ready for this one,” he said. “But that competition with the unusual prep gave me confidence that I can do a good set of dives, whatever the situation.”

Knight-Wisdom, who was ranked 27th in the world last year, said that preparations for the meet have not gone as he would have liked, but he is confident of his ability and ready to return to action.

“I’ve been feeling a little off colour in training the last few days,” he said. “But I think that’s just down to the anticipation of the competition coming in and obviously wanting to do well. But I’m excited to get to Madrid, start training and get back into international competition. I trust in my dives and my process, so I’m always ready to go.”