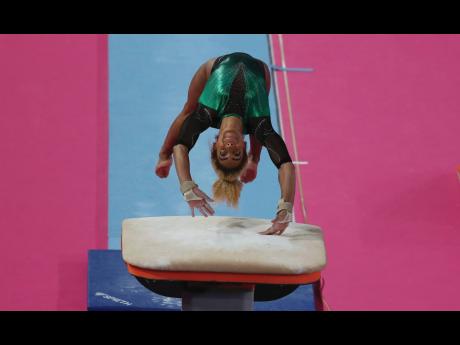 Jamaican gymnast Danusia Francis is hopeful that a recent United Kingdom (UK) policy regarding athletes returning to training will be changed to allow those who represent other countries to continue preparations for the 2021 Tokyo Olympics.

Francis was speaking with The Gleaner in an interview on Instagram on Thursday, where she discussed the future of local gymnastics as well as her plans for a stunt-double career once she retires.

The 26-year-old was referencing recent guidance released by the British government that outlined the return of training for athletes in performance facilities as the country plans a return to normalcy during the novel coronavirus pandemic. However, it defined an elite athlete as a senior representative who could “compete on behalf of Great Britain and Northern Ireland” at the Olympic Games or any UK territory (England, Wales, Scotland) at the next Commonwealth Games. Francis, who was born in the UK but who has represented Jamaica since 2015, would not be eligible to return based on this wording.

She originally tweeted her concerns earlier this month, saying that the ruling was discriminatory in nature and that “if it is OK for British athletes to train, the same should be allowed of reps residing in Britain of other nationalities”. She said that the rule change would allow athletes like her to resume training as soon as possible.

“If we can get that overall rule changed, we will not only be helping ourselves, but everybody in the same position,” she said. “Fair enough that some countries have had their lockdowns open up earlier, but when it’s in your country, the country that you are living in, then you are expected to go back at the same time.”

The current ruling, she said, also affects fellow Jamaican gymnast Reiss Beckford and members of the Jamaica rugby league and rugby union teams who are based in the UK.

Francis said that she has been encouraged by feedback on the issue, specifically from her member of Parliament for West London, who responded to her email detailing her concerns and committed to address them with Sports Minister Nigel Huddleston. She hopes that the increased awareness will lead to quick adjustments to allow parity to maximise preparation time for next year.

“He got back to me really fast, which was great and definitely a great thing that he responded and saw that it needs to be changed,” she said. “So now, he is going to take it to the sports minister. It’s showing that the members of parliament for the local areas, they are seeing that this is wrong. So, hopefully, now people in charge can see it and change it, and ,hopefully, quickly. That’s the thing that we want because we are losing time.”