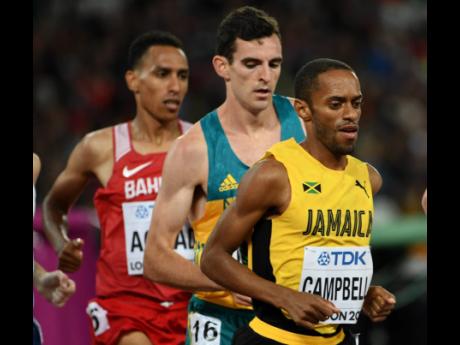 File
In this file photo from August 2017, Jamaica’s Kemoy Campbell (right) takes part in heat two of the men’s 5000m race at the World Athletics Championships in London, England.

Olympian Kemoy Campbell believes that, for Jamaica to improve in distance running, the mentality of aspiring athletes has to change to give the craft the seriousness he says it deserves.

Campbell says that local athletes who wish to take up the discipline must not cheat the process of putting in the necessary work required.

“It has to start from the ground up,” Campbell told The Gleaner on Instagram on Thursday. “You have to build a foundation and for people to understand that a distance runner is not like someone who is lazy.

While he acknowledges that the culture of Jamaican athletics is geared towards the sprints, he says that an open mind should be kept to venture out into other areas that are better suited to their skill set.

“Jamaicans have this tendency to want to be sprinters, because its fast money,” he said. “It does not matter. If you are not good, there is no money. So you might as well try something else and see where it takes you. People have to try and see what they are good at, and once they figure out that this is something that they are good at, they have to work hard.”

Campbell says that mentorship is a key component in fostering an environment that will be able to produce strong talent in distance running. He is keen on being a part of the solution, to give advice to those who wish to follow in his footsteps.

“The reason why I got where I got is because of people here who have done most of the work, who have competed well, have been mentors to me, have talked to me and told me how they got to where they got,” he said. “If I see a fellow Jamaican distance runner trying to make something of themselves, I am definitely going to try and help them.”

Campbell wants a future with more distance runners, which he says will lead to assistance and support for their overall development.

“I don’t want to be the only distance runner who can claim that I went to World Games and competed. I want to see other people doing that,” he said. “I think it starts with the mentality first and, once you find yourself working hard and getting somewhere, then a lot of help will come along the way.”