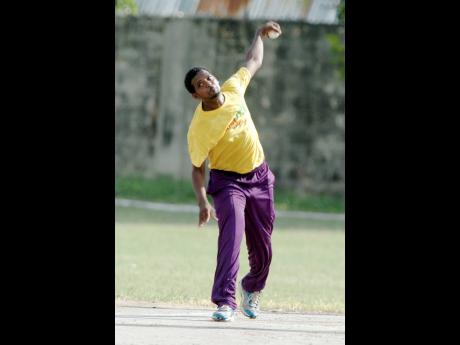 Jamaican left-arm chinaman bowler Dennis Bulli could not hold back his excitement after being selected by the St Kitts and Nevis Patriots for this year’s Caribbean Premier League (CPL).

Bulli, who had a breakout season for Jamaica in last year’s Super50 competition, where he snared 12 wickets in six games, says he is finally reaping the rewards for the hard work which he has put in over the last couple of seasons.

“I am really elated to finally get a chance to play in the CPL. I have been putting in the work and I want to celebrate this opportunity with my mother, who has been my rock through all of this. She has been my biggest supporter and I want to go out there and make her proud,” said Bulli.

Bulli will be joining up with compatriots Fabian Allen and best friend Sheldon Cottrell at the Patriots, and he is relishing the opportunity to play alongside Cottrell, who he describes as his ‘brother’.

“Sheldon and I are really close coming from the Jamaica Defence Force (JDF), and he called to congratulate me ... he has been supporting me and believing in me from the outset, so I am just eager to take that chance and prove my worth on the international scene,” he shared.

Bulli has had to juggle his duties as a soldier with the JDF during the coronavirus pandemic and his training, which he says has been coming on nicely, despite the difficulty.

“I have been doing a lot of spot bowling and trying to get my range and trajectory right. In T20 cricket, you have to be in two mind frames at once, which is attack and defence, because the game is so fast-paced and you have to work out batsmen quicker, so you cannot relax,” Bulli reasoned.

The Kensington Cricket Club player says he already feels welcomed by his new franchise, as he has received an encouraging call from Australian coach Simon Helmot.

Bulli and the rest of the CPL players are expected to gather in Trinidad & Tobago in the first week of August, when they will quarantine for two weeks before the start of the tournament, which is slated to get under way on August 18 and run through to September 10.