‘This is for you’ 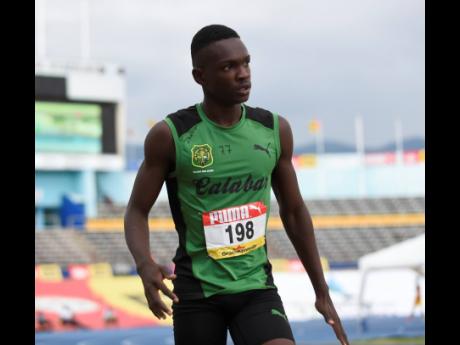 The highlighted performance on Friday’s first day of the Anthrick Corporate Area Development Meet, which was held inside the National Stadium, came from Calabar High School’s long jumper, Jordan Turner, who exploded to a record mark of 7.82 metres to win the Class One event, in the process, erasing the old mark of 7.75m.

Turner’s mark was also a World Athletics Under-20 Best, as the 18-year-old moved ahead of the United States’ Stacy Brown, who did 7.69m to win in Texas on March 6. His teammate, Luke Brown, who was second with 7.45m, is now number four on the World Under-20 list.

The outstanding Turner, who has only lost once in the event in his ISSA/GraceKennedy Boys and Girls’ Athletics Championships career, so far, when he finished second in Class Three, spoke to The Sunday Gleaner after his result, which he dedicated to his former coach, Nicholas ‘Soapman’ Neufville, who was killed last month.

“The record-breaking performance and world-leading mark is dedicated to coach Neufville, as this is what he really wanted from me. I was motivated to do well because of him and every attempt I made, I thought about him,” said Turner, who achieved the mark on his second attempt.

“Coach (Neufville) was like a father to me and all my years in high school he has coached me. His death has affected me badly, but I used that as motivation to do well and I am indeed sad he is not around to see this. His aim for me is to go to the World Juniors this year and win the event and I am determined to do it for him,” Turner continued before sharing that he wants to do something special at Champs this year.

“The next thing for me is to break Wayne Pinnock’s record of 8.05m and I am even more motivated to do this because this is what coach Neufville would have wanted,” concluded Turner, who is now being conditioned by former Calabar long jumper Javier Lowe.