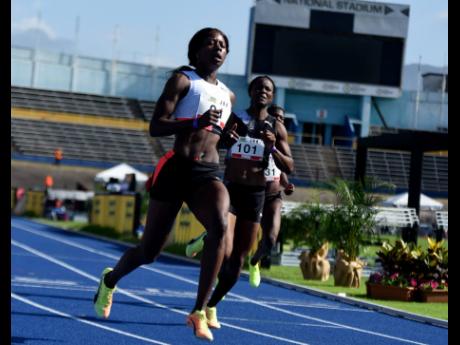 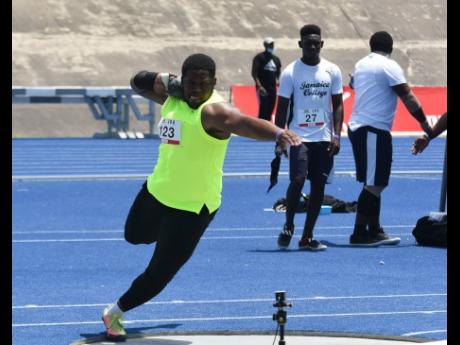 Kenyon Hemans
O’Dayne Richards wins the men’s shot put with a distance of 19.85m at the JOA/JAAA Olympic Destiny Series at the National Stadium yesterday.
1
2

In the first event of the morning, Jackson, following up on an average performance in the 400m at the Gateshead Diamond League last Sunday, showed her versatility in the sprints after a commanding victory, stopping the clock at a personal best of 11.02 seconds, and earned $70,000 for topping the Classic event.

MVP Track Club’s Shockoria Wallace finished second in 11.34s while it was third for Jodean Williams of Racers Track Club in 11.44s.

Barnes, the former Manchester High School athlete, competing in the second heat of the men’s 400m, was impressive, winning in 46.14s to be the quickest on the day. With the event being a Premier one, he pocketed $100,000.

Puma’s Roneisha McGregor continued her fine form in the series. After winning the women’s 100m and 200ms the previous week, she staved off the late challenge of Sprintec’s Tovea Jenkins to capture the 400m in 51.51 seconds. Jenkins clocked 51.77s for second, with Christine Day of Cameron Blazers taking third in 52.75s.

Commonwealth Games 400m hurdles champion Janieve Russell was also in fine form at the meet. Fresh off her third-place finish in the women’s 400m hurdles in Gateshead, she raced to a season best 54.75s, which put her at number four on the World Athletics list. She also pocketed $70,000 as it was a Classic event.

It was a one-two for MVP athletes in the women’s 200m. Here the strength of quarter-miler Stephenie Ann McPherson prevailed over Natasha Morrison, who led for majority of the way. McPherson caught her late to score the win in a season’s best 22.97s, to Morrison’s 23.08s for second. MVP’s Srabani Nanda was third in a season’s best 23.43s.

Earlier, Nigel Ellis’ good form in the sprints continued after a close win in the men’s 100m. The MVP athlete battled his way to victory over Sprintec’s Oshane Bailey, with both clocking 10.17s.

Reigning long jump world champion Tajay Gayle was in blazing form in the sprints as he clocked a personal best 10.18s to win his heat and finished third overall.

In the first heat, pre-race favourite Tyquendo Tracey was disqualified for false-starting. In a strange move, however, he was allowed to compete in a later heat where he won in 10.15s, but was disqualified from collecting a monetary incentive despite recording the fastest time on the day.

G.C. Foster College’s Shawn D. Thompson won the men’s long jump with a distance of 7.63m, and O’Dayne Richards captured the men’s shot put with a heave of 19.75m.

Among the women, Samantha Hall of Throwers R US won the women’ s discus with a throw of 57.53m. St Jago High School’s Shantae Foreman (6.09m) scored a win over GC Foster College’s Tissanna Hickling, who could only manage 6.07m for second.