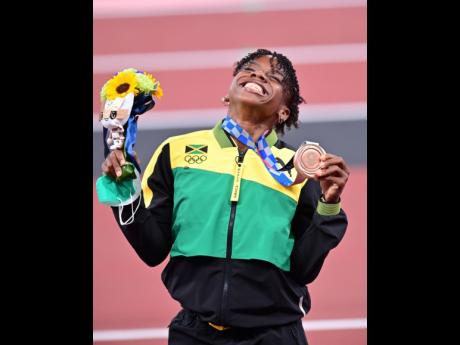 Gladstone Taylor
History-making Jamaican Megan Tapper celebrates becoming the first Jamaican female to win a bronze medal in the women’s 100 metres hurdles, during the medal ceremony at the Tokyo 2020 Olympics at the Tokyo National Stadium in Tokyo, Japan, yesterday.

She will never be the tallest in a room, but you will struggle to find a bigger heart than that of freshly minted Olympics 100 metres women’s hurdles bronze medallist Megan Tapper.

The bubbly, pint-sized, bundle of energy ended years of misery for Jamaica in one inspiring run at the Tokyo Olympic Stadium yesterday morning.

The result means that Tapper becomes the first Jamaican woman to win a medal in the women’s 100m hurdles at the Olympic Games.

“Everybody, thank you so much. Everybody who supported the journey, who bought a pillow, who bought a jacket, who bought the shirt, who bought a hat, this victory, this bronze medal is as much yours as it is mine,” she said, in reference to the support she received for her line of products, which were meant to celebrate the experiences on the way to her ambitions, which were realised yesterday.

“Big up my coaches Mattheau and Phillip, Caroline, Brando, my brothers, my father, my mother, my mother in law, my stepmother. My whole family,” said Tapper. “Big up Jamaica.”

It was only two years ago that Tapper was crying uncontrollably inside the Khalifa International Stadium in Doha at the World Championships after a misstep before the first hurdle ended whatever chance she had in her first senior international final before it had even begun.

A year before that, she hit the fifth and ninth hurdles in the final at the Commonwealth Games in Australia, which caused her to finish only seventh.

Those trials led her to this triumph, and if clearing hurdles is her literal day job, then the metaphorical connections did not go unnoticed by Tapper, who says she is already moving beyond the setbacks.

“I am really grateful,” said Tapper, draped in the Jamaican flag, smiling from ear to ear. “To be honest, I don’t remember any of the struggles right now. I’m just so grateful.”

Her medal was Jamaica’s fourth at the Tokyo 2020 Olympics after the podium sweep in the women’s 100 metres.

“I was nervous, like, extremely nervous, as expected. This is an Olympic final. But I just asked God to show up for me, and that He did. I went out there, and I got a good star. I didn’t get left in the blocks, and I just kind of maintained the focus and did the best that I could in the middle of the race and ran. Did my Veronica Campbell (brown) dip to the finish line, and it got me a bronze medal, so I’m grateful,” Tapper added.

With a taste of medal success, Tapper says she is already thinking about improvements and gave a special thank you to her husband and coach, Mattheau.

“I mean, as small as I am, and I am probably not as talented as the other Jamaican athletes, but I have always set the bar really high for myself, so I see myself on the highest of the acme, so I definitely saw myself here,” she shared.

“Now it’s all about lowering the times, getting better, getting faster, because I mean the sky’s the limit,” Tapper maintained.

“I did a lot of interviews, and I forgot to big up Dr Wesley Morris and Greg Haughton, who have been there with me from 2019. I mean, there was always talent, and there is always the great spirit. There was always the determination, but I didn’t know how to get it going forward, and they were the ones who jumped in and helped me, and this medal is as much theirs as it is mine,” Tapper stated.