‘All the Jamaicans who are beating the men... and posting the negative comments, you need to stop it’ 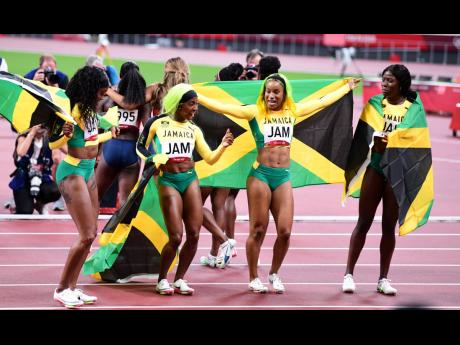 Jamaican sprinting icon Shelly-Ann Fraser-Pryce has come out in defence of the island’s male athletes, who have been on the receiving end of criticism for their medal return at the Tokyo 2020 Olympic Games.

With just the men’s and women’s 4x400m relays left to come for the Jamaicans, only two of the eight medals won so far by Jamaica were delivered by male athletes.

Hansle Parchment won gold in the men’s 110m hurdles with Ronald Levy taking the bronze medal in the same event.

On the female side, Elaine Thompson-Herah, Fraser-Pryce and Shericka Jackson swept the 100m final, while Thompson-Herah returned to win the 200m gold and Megan Tapper claimed silver in the 100m hurdles event. The women’s 4x100m team also won the gold medal.

“We were waiting to go out there on the track with them with some excitement but it never happened. The second leg had a mishap, but it happens,” Fraser-Pryce said after the men’s 4x100m finished fifth in 37.84 seconds.

The eight-time Olympic medallist defended the male athletes and called on Jamaicans to support their efforts.

“All the Jamaicans who are beating the men and cursing and posting the negative comments, you need to stop it. It takes a lot of guts and hard work year-to-year to come out here and represent,” Fraser-Pryce said.

“Many persons are here competing at these championships and many are going away without making the finals. We were in the finals (men’s 4x100m), so we need to start celebrating the men because their time is coming. We don’t want any waggonists,” added Fraser-Pryce.

At the 2016 Rio Olympic Games, Jamaica’s men landed five of the team’s 11 medals including four of the six gold medals mined. Two of those gold medals were won by Usain Bolt, while one was secured by the men’s 4x100m team that included the double world record holder. Omar McLeod was responsible for the other male gold medal from Rio 2016.

Again Bolt led the way, being involved in three gold medals - the 100m, 200m and men’s 4x100m, while Yohan Blake won two silver medals and there were bronze medals for Warren Weir and Hansle Parchment.