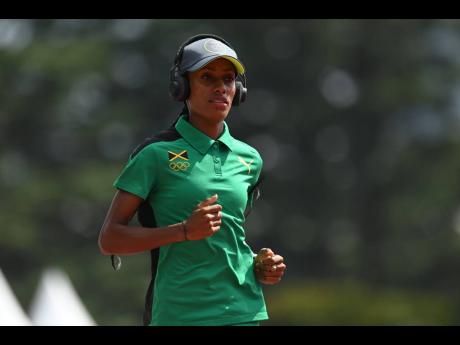 Jamaican 400-metre hurdler Ronda Whyte says she feels extremely disappointed with her false start in the first-round assignment at the Tokyo 2020 Olympics, but assured that she will not allow the letdown to devastate her, as she focuses on continuing her development.

Whyte, who arrived at the Olympics after a season that saw her improve her time to 54.29 seconds, had high hopes for the competition in Tokyo, but saw those dreams disappear when she was shown the red card after her false start in the heats - a rarity in the 400 metres hurdles.

The 30-year-old said she was unsettled because of anxiety, but was quick to point out that she is confident of rebounding from the setback.

“I was very focussed going into that race because I knew I was in very good shape, so nervousness is all natural. But I think it was more a case of anxiety. I had a burst of anxiety, because I was saying it was my first Olympics and I really want to make it, and I had so much expectations of myself, so it really was the burst of anxiety that triggered that moment,” Whyte told The Gleaner.

“But I will bounce back from this, or will I allow what people see or say to break me? Is it going to make me? For me, it’s about this experience and how it is going to shape me to be a better athlete in the future,” Whyte added.

“Sometimes your breakthrough comes after your biggest disappointment, and I want to motivate myself to build my strength because I know that there will be naysayers. I have nothing to prove to anyone, but I know I have God and know that the future is still bright. I am not going to give up on my dreams, and I am not going to give up on myself because of one disappointment. I have received a lot of inspiring messages from others, who say they don’t know how I acted so strong after everything. It’s just the grace that God has on my life,” Whyte added.

Whyte lowered her personal best to 54.33 seconds in May at a meet in Florida, before taking it down even further to 54.29 seconds at the National Senior Championships, where she finished second.

She was expected to easily advance to the second round of the 400 metres hurdles at the Tokyo 2020 Olympic Games and push for a spot in the final, but was left to rue her mistake. Whyte relived her emotions and reaction to the expulsion.

“When I look back, the only thing I can say is I felt completely numb. When I stood there and saw the red card, I asked, ‘God, am I really out of this Olympics so early?’ I didn’t even get a chance to run,” Whyte said.

“Because of the grace that God has on my life, I could gracefully walk off the track because I knew within myself that at some point I am going to cry over the disappointment, but I wanted to be humble in the moment because I know that I am going to bounce back and when I do, I am going to bounce back very well, so I just wanted to keep my composure and show the world that in times of disappointment, especially when the eyes of the world are on you, maybe someone can be inspired by the way you react in that moment,” she continued.

Continuing, the Jamaican said her focus at this point is to make the most of the remainder of the season and set herself up for next year’s World Championships in Eugene, Oregon.

“I have been through disappointment before and I know how to handle it, so I want to keep that positive side. I am not really living for myself, I want someone to look at me and say that ‘because of her I did not give up’. So at the end of the day, I’m not going to let it consume me, because once you have life there is hope, and there is a lot more to come. I will not think about what people will say, I am thinking about the comeback,” Whyte stated.

“God allowed me to be an Olympian,” she affirmed. “This is an event I used to sit and watch, hoping that I would make it one day. I made it. It wasn’t the result that I wanted, but I am really grateful.”