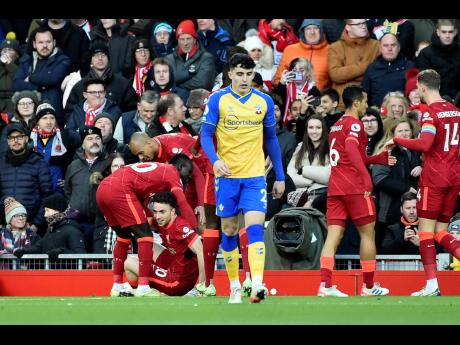 AP
Liverpool’s Diogo Jota (on the ground) reacts after scoring the opening goal during the Premier League soccer match between Liverpool and Southampton at Anfield stadium, in Liverpool, England, yesterday. Liverpool won 4-0.

DIOGO JOTA celebrated scoring the quickest goal in the English Premier League this season by sitting on the Anfield turf, crossing his legs and pretending to play on a gaming console.

In another masterful display by the best attack in the league, Liverpool swept to a 4-0 win to become the first top-flight team since Sunderland in 1927 to score two or more goals in 17 straight matches in all competitions.

Needless to say, Jürgen Klopp’s ruthless team is comfortably the top scorer in the Premier League with 39 goals – no other side is within eight – and the latest victory pulled Liverpool to within a point of leaders Chelsea, who play against Manchester United.

“They are a team on fire,” Southampton manager Ralph Hasenhüttl said. “It was unbelievable how well they played.”

Jota led Liverpool with two goals – the first coming after 97 seconds, with his celebration perhaps a nod to his off-field penchant for gaming. Indeed, he won a FIFA 20 tournament played by Premier League stars while soccer was suspended last year following the coronavirus outbreak.

Liverpool were 3-0 ahead after 37 minutes and could easily have doubled their final goals tally.

“We could have scored more if we had been calmer,” Klopp said. “The boys ... are difficult to defend. Difficult to find a challenge with quick movements and passing. That is why we come through.”

Liverpool’s aggressive, front-foot style is something Eddie Howe is trying to bring to Newcastle after taking over at the Saudi-controlled northeast club.

A 2-0 loss at Arsenal extended Newcastle’s winless start in the league to 13 games and the team is in last place, three points behind next-to-last Norwich and six from safety. Norwich drew 0-0 at home to Wolves, while 17th-placed Leeds were held at Brighton to 0-0, too.

“When you’re lacking in confidence, you’ll naturally attract criticism and we’ll have to take that and be broad-shouldered,” Howe said.

“But if we stay committed like we were today, then we will have a chance.”

Arsenal scored second-half goals through Bukayo Saka and the man who replaced him as a substitute, Gabriel Martinelli, as Mikel Arteta’s team continued its recovery from losing its first three league matches without scoring.

Arsenal are in fifth place, level on points with fourth-placed West Ham.

Liverpool great Steven Gerrard’s start to life as a Premier League manager could not be going any better.

Aston Villa have two straight wins under Gerrard, a 2-1 at Crystal Palace coming a week after a 2-0 at home to Brighton.

Goals by Matt Targett and John McGinn helped Gerrard get the better of Palace manager Patrick Vieira, a battle of the Premier League midfield greats.

Marc Guehi scored a stoppage-time consolation for Palace, which lost at home for the first time under Vieira.