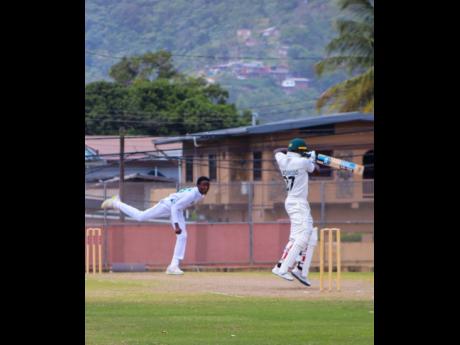 Contributed by Brandon Corlette
Jamaica Scorpions plays off the backfoot during a West Indies Championship game against the Guyana Harpy Eagles at the Diego Martin Sports Complex on Wednesday.

Jamaica Scorpions batsman Jermaine Blackwood hit his 48th First Class half-century to lead the Jamaican franchise to 166 for four at tea on day one of their West Indies Championship fourth-round match against the Guyana Harpy Eagles.

Blackwood, unbeaten on 66, added 35 more runs following the loss of Paul Palmer who went for 18 to left-arm spinner Gudakesh Motie.

The right-handed Blackwood has since found a useful partner in Alwyn Williams, who is not out on 33. The pair has so far put on 67 runs for the fifth wicket with the Scorpions adding 76 in the post-lunch session.

Off-spinner Kevin Sinclair has been the pick of the bowlers so far with two wickets for 58 runs.

Over at the Queens Park Oval, the Leeward Islands Hurricanes are 158 for seven at Tea against the Windward Islands Volcanoes.

Wicketkeeper Jahmar Hamilton has so far top-scored with 52, while Terance Ward is not out on 27. Devon Thomas made 25 against three wickets for 47 runs from left-arm seamer Preston McSween and two wickets for 38 from off-spinner Kenneth Dember.

Over at the Brian Lara Cricket Academy, the Trinidad & Tobago Red Force were dismissed for 133 against the Barbados Pride, with captain Imran Khan top-scoring with 29 and 25 from Terrance Hinds.

Left-arm spinner Jomel Warrican was the pick of the bowlers with three wickets for 21 runs. There were two wickets each for Justin Greaves, Ramon Simmonds and Akeem Jordan. Barbados is set to reply after Tea.