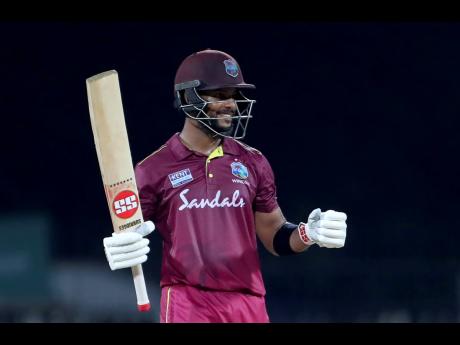 Shai Hope led the way with a brilliant unbeaten 119 from 130 balls with 12 fours and two sixes, to guide the West Indies to 249 for three after being asked to get a target of 247 in 45 overs in the rain-affected contest.

Sent to bat, the Netherlands posted 240 for seven in their 45 overs after rain wiped out some two hours of play.

Hope, who was scoring his 11th ODI century, shared in a 120-run opening stand with Shamarh Brooks, who chipped in with a steady 60 from 67 balls inclusive of three fours and two sixes.

Brandon King and Hope then finished off proceedings with an unbeaten 116-run fourth-wicket stand. King clocked 58 from 51 balls with five fours and two sixes.

Pooran, who contributed just seven runs to the chase, praised the effort of the man of the match Hope, along with Brooks and King for securing the opening victory in the three-match series.

“Shai was excellent and Brooks got an opportunity to bat at the top and he grabbed it with both hands. King came in and played good in the end and we enjoyed it today.”

The West Indies bowling unit had to dig deep to restrict the Netherlands side which got off to a flying start, thanks to 47 from Vikramjit Singh and 58 from Teja Nidamanura.

Two wickets from Akeal Hosein and Kyle Mayers then pegged back the home side.

Pooran is hoping his side can get sharper and get used to the chilly conditions in the Netherlands for the next couple of matches.

The teams will face off in the second ODI on Thursday.