Scorpions lose early wickets against Hurricanes on Day One 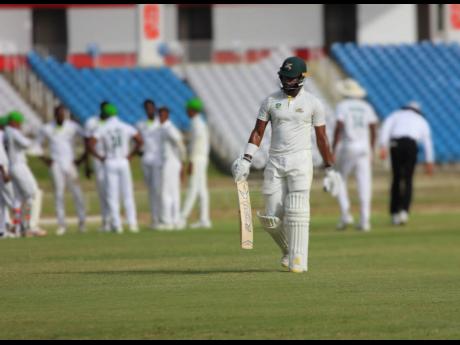 Contributed
Action from last week's West Indies Championship Game between the Jamaica Scorpions and the Windward Islands Volcanoes. The batsman walking off is John Campbell.

The Jamaica Scorpions have found themselves in early trouble against the Leeward Islands Hurricanes on day one of their fifth-round West Indies Championship match at the Brian Lara Cricket Academy in Tarouba.

At lunch, the Scorpions, who were sent into to bat were 56 for four, with Paul Palmer not out on 24 and with him is Derval Green on two.

Over at the Queens Park Oval, The Trinidad & Tobago red Force, electing to bat against the Guyana Harpy Eagles, reached 71 for two at lunch. Opener Jeremy Solozano is not out on 26. Isiah Rajah had earlier made 26 against one wicket each for Kevin Sinclair and Keemo Paul.

At the Diego Martin Sports Complex, The Windward Islands Volcanoes, electing to bat, were 103 for four at lunch against the Barbados Pride. Teddy Bishop is not out on 19 as Kavem Hodge made 24 and Devon Smith, in his final first-class game, getting 11.