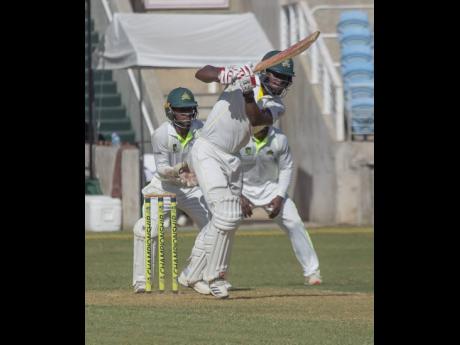 FORMER CAPTAIN Paul Palmer played a mature innings, scoring a career-best unbeaten century to guide the Jamaica Scorpions to 302 all out on the opening day of their fifth-round West Indies Championship match against the Leeward Islands Hurricanes at the Brian Lara Stadium in Tarouba.

When play ended on day one, Palmer was still carrying his bat on 144 as the left-hander shared in a couple of late-order partnerships to rescue the Scorpions from the ignominy of a poor first-innings score.

Palmer came to the crease with a Scorpions innings in tatters at seven runs for two wickets after pacer Jeremiah Louis sent back debutant opener Kirk McKenzie for three and Sheeno Berridge accounting for the wicket of Jermaine Blackwood, also for three.

After being asked to take first strike, the score would look even worse three runs later as captain John Campbell (two) edged a Berridge delivery to slip to be third man out.

It was clear that a rescue act was needed, and Palmer stood up to be counted after he and Alwyn Williams first started the recovery job.

The pair put on 46 runs for the fourth wicket before Williams went for 17. Derval Green didn’t spend much time at the crease for his two runs, but Palmer found another useful partner in wicket-keeper Aldane Thomas, and the pair added 63 runs for the sixth wicket.

The aggressive Thomas tried to take on spinner Cornwall one too many times and was caught at slip trying a reverse sweep for 31.

During that partnership, Palmer brought up his half-century off 88 balls, but it was the next batter, Jamie Merchant, who provided the best foil for the left-hander.

Merchant was his usual aggressive self and quickly sped to 55 off 58 balls. He had to count his lucky stars after being put down on a couple of occasions. He and Palmer would add a remarkable 102 runs for the seventh wicket to lift the Scorpion’s score to 221 for seven.

Palmer then battled through another tough partnership with Nicholson Gordon, and they added 59 for the eighth wicket, with Gordon scoring just 10 in that stand.

By that time, Palmer had brought up his fourth regional century, and the Westmorland native was looking to add more misery to an already deflated Hurricanes attack.

After getting over the 300-mark, the last man, Patrick Harty, could not see out the day and was out caught and bowled by Terrance Warde for three, to leave Palmer unbeaten on 144 from 233 balls.

Over at the Queen’s Park Oval, the T&T Red Force ended the day on 203 for nine against the Guyana Harpy Eagles. Opener Jeremy Solozano has so far top- scored with 72. Jason Mohammed made 68 against Keemo Paul, who, so far, has bagged five wickets for 41 runs. Gudakesh Motie has taken two wickets.

Over at the Diego Martin Sports Complex, The Barbados Pride were 109 for one, replying to the Windward Islands Volcanoes first-innings score of 203.

Raymon Reifer is unbeaten on 56 and with him is captain Kraigg Brathwaite, on 39. Earlier, Ramon Simmons took three wickets for 25 runs to restrict the Volcanoes.

Off-spinner Roston Chase also picked up three wickets, despite 44 from Teddy Bishop and 37 from Larry Edward. The Pride trail the Volcanoes by 94 runs.