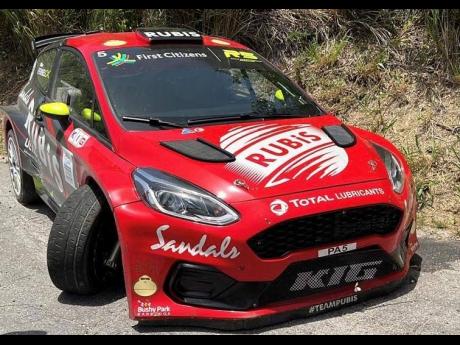 The Sol Rally Barbados has not been kind to Jamaican driver Jeffrey Panton and co-driver Mike Fennell Jr in recent years as for the second time in the past three outings, Panton failed to complete the two-day event.

Back in 2019, Panton suffered a horrific crash in his then Ford Focus, then he ended up placing third in 2020 after breaking an axle with two stages to go after leading for the majority of the rally.

With no competition held in 2021 due to the COVID-19 pandemic, Panton competing in the R5 class in his new Rally 2 Ford Fiesta but crashed out on the opening day of the 2022 event.

“On that second stage, we ran wide on a corner and the back of the car lost grip, and we ended up hitting a bridge, which severely damaged the suspension, and we couldn’t continue,” said Panton.

With the attrition rate of the rally at an all-time high, Panton was one of 32 participants which had to retire from the rally, which was won by Barbadian Dane Skeete and co-driver Tyler Mayhew driving their WRC Subaru Impreza in a time of 1:10: 44.66.

Barbadian Josh Read was a minute and nine seconds behind in second place in their Ford Fiesta, with British driver Robert Swan placing third in 1:12:31.13, also in a Ford Fiesta.

After missing out on competing in next month’s rally in Guadeloupe, Panton, who won the Barbados Rally between 2015 & 2018, says the car should be up and running soon to return to Barbados to complete the Rally Sport Championship, which is at the halfway stage.

Panton says there are also plans in the pipeline to expand that championship series in 2023.

“Right now, we are in the inaugural year of that R5 Championships, and next year it will be expanded to a Caribbean Championship which will include Trinidad and Tobago, Jamaica, Guadeloupe, Martinique, as well as Barbados,” Panton added.