Brathwaite wants WI to ‘stay on the gas’ 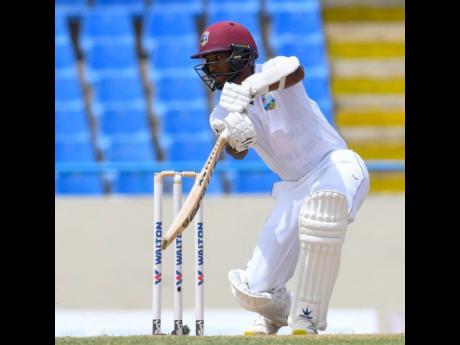 West Indies captain Kraigg Brathwaite says his side will be looking to maintain the pressure and “stay on the gas” against Bangladesh when the sides meet in the second Test starting today at 9 a.m. Jamaica time at the Daren Sammy Stadium in St Lucia.

The regional side enters the contest with a one-nil lead in the two-match series following victory in Antigua and Barbuda, and the West Indies will have added motivation to secure a second win as they lie just two points behind Pakistan in the ICC Test Championship table.

A win would see the West Indies go to fifth in the table, and Brathwaite knows all too well that Bangladesh will be coming hard in the second Test.

“Focus is going to be big and attitude also. We can’t take things for granted, and we must know that the first game is gone, and that’s history. We know Bangladesh are going to come and fight again, so we have to be on it,” said Brathwaite.

Half-centuries from Brathwaite, Jermaine Blackwood, and John Campbell in the first Test were some of the bright spots for the hosts, however, the team also lost wickets in clusters in both innings, which could be exposed once again against a Bangladesh seam attack that is adapting to the Caribbean surfaces.

For Brathwaite, consistency can’t be preached enough if the team is to seal a two-nil series victory.

“In our team meeting, we looked back at the Pakistan series last year where we were leading one nil from the first Test and we lost the second Test. We can’t allow that to happen against Bangladesh. We have to continue to work hard and stay on the gas.”

The West Indies could be tempted to play the same eleven that won the first Test by seven wickets, but with the surface having an even spread of grass, another seamer could factor, with Anderson Phillip also in the squad.

Despite scores of 11 and two in the first Test, left-hander Raymon Reifer is set to maintain his number-three position in the batting order. Despite scepticism from pundits, Brathwaite believes his countryman is well equipped for the role.

“We believe 100 per cent that Raymon could do the job. The number-three position is like opening. It’s all about mental strength, and we know Raymon has that.”

In the meantime, Bangladesh could make at least one change to their side that lost the opening encounter with batsman Anamul Haque replacing Najmul Hossain Shanto.