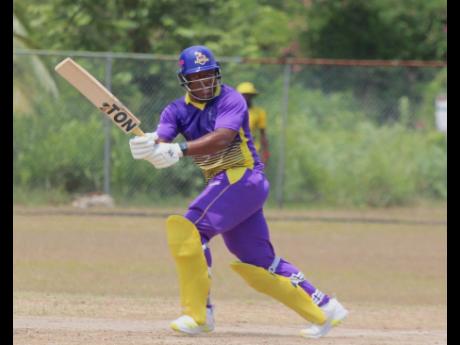 Title favourites Kingston Cricket Club secured one of the biggest victories in the quarterfinals of the Jamaica Cricket Association 50 overs competition following a 117-run win over Clarendon CC in their encounter at Port Esquivel on Saturday.

The Tigers from Kingston batted first and posted a formidable 270 for seven in their allotted 50 overs, with West Indies and Jamaica batsman Brandon King leading the way with a magnificent 121 off 90 balls.

King hit 11 fours and six sixes as he and national opener Kirk McKenzie put on 114 runs for the second wicket. McKenzie contributed 68 from 94 balls with four fours and five sixes.

Jermaine Thomas took three wickets for 42 runs while Albert Gopie bagged two for 48 for Clarendon, who were dismissed for 162 in 36.4 overs.

Gopie returned with the bat to get 47 and veteran Krishmar Santokie 39, against three wickets for 44 runs from West Indies and Jamaica pacer Odean Smith. Everton O’Haro also took three wickets, which went for 30 runs.

At Kensington Park, the home side eased into the final four following a comprehensive eight-wicket win over Westmorland.

Batting first, Westmorland posted 231 all out in 47.1 overs, with Shahid Crooks top-scoring with 71 and Michael Frew getting 52. Tamari Bedward bagged four wickets for 31 runs, with Alex Hinds grabbing two for 46.

Captain Ryan Francis then stroked a brilliant unbeaten 119 to lead Kensington to 233 for two in 37.1 overs. Delbert Gayle chipped in with 40.

Over at the Manley Horne Park, home side St Elizabeth went down by five wickets to St Mary Cricket Association.

St Elizabeth first posted 179 all out, with Kerry Holness top-scoring with 35 and Lennox Simpson 33 against three wickets for 15 runs from Tyrone Daley.

Daley then returned to hit an unbeaten 59 from 78 balls with four fours and two sixes to lead St Mary to 181 for five in 34 overs. Damion Ebanks picked up three wickets for 34 runs.

At Up Park Camp, the home side Jamaica Defence Force (JDF) were too good for the visiting St Thomas Cricket Association side.

St Thomas were first routed for 111 in 20 overs, with national fast bowler Gordon Bryan bagging three wickets for 21 runs despite 22 from Kashane Roberts and 19 not out from Jowayne Robinson.

Kevin Daley then set up the victory with a quickfire 44 from 26 balls as JDF got to 116 for four in 16.5 overs. Deethmar Anderson weighed in with 32.