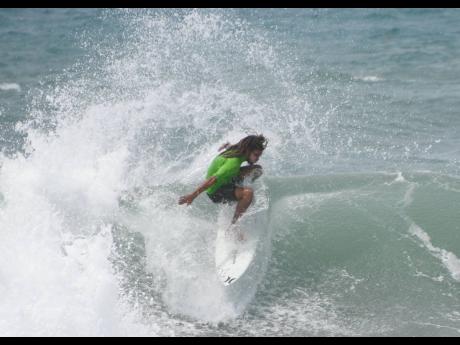 Contributed
Elishama Beckford pulls off one of his manoeuvres during the Jamaica Surfing Association National Open Series competition at Lighthouse Beach, Kingston.

Elishama Beckford was in excellent form over the weekend as he secured top honours in the fourth event of the Jamaica Surfing Association (JSA) National Open Series at the Lighthouse Beach in Kingston.

Beckford, who was taking part in just his second event of the series, secured first place by amassing 1,000 points in challenging, windy conditions at Palisadoes.

“The conditions were challenging with seven-foot waves, but it was still a lot of fun. The aim is to continue working hard and try to bring the A-game to the Pan American Championships,” Beckford said.

Ronald Hastings out of Bull Bay placed second after racking up 860 points, while third place went to Akeam Phillips, who amassed 730 points.

There was no competition in the female division due to the adverse conditions.

Phillips continues to lead the five-event series with 3,050 points after scoring 730 at Copa Beach, followed by 860 points at Boston in Portland and 730 at Makka in St Thomas.

Beckford, who is just recovering from a serious ankle injury, has moved up to the sixth position in the standings.

He, along with Hastings and Akeam Phillips, will form part of the national team who will be travelling to Panama to represent Jamaica at the Pan American Surfing Games in August.

For Beckford, who spends a lot of his time surfing overseas, Jamaica is gaining a lot of attention on the international surfing scene, with a number of the island’s top surfers garnering sponsorship and exposure to global competitions.

“The top surfers in Jamaica are right on par with the top international surfers. People like Hastings are pushing the envelope, and the international surf scene realises that Jamaica has the goods and we are stepping to that level,” Beckford said.