West not ready for hurricane season, but… 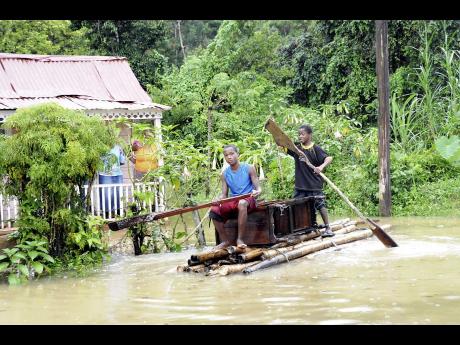 In this 2010 file photograph, the then 14-year-old Novel Sawyers and his friend, Kemar Barrett, then 13, use their home-made raft to traverse the flood waters near their home in Chigwell in Hanover.

Despite the efforts of disaster coordinators in western Jamaica, inadequate funding, closed shelters and a lack of equipment have left the region only 70 percent ready for the 2015 hurricane season, which officially started last week.

In Westmoreland, the parish's disaster coordinator, Hilma Tate, is presently awaiting funding from the Ministry of Local Government to address some pressing concerns, especially in the area of drain cleaning.

"The parish council has been undertaking drain cleaning, but the allocation for special drain cleaning has not yet arrived," Tate told Western Focus. "We are also in need of special equipment to clean the mouth of the major rivers, especially the Cabarita River. We are asking the Ministry of Agriculture to help us with the required equipment."

Tate said failure to clean the mouth of the Cabarita River could spark flooding in communities such as McNeil Lands, Georges Plain and Frome. Nonetheless, she said a number of sinkholes have been cleaned in Peggy Barry and Town Head as part their flood mitigation plans.

In regards to shelters, Tate said the parish is behind in the inspection of emergency shelters. Of the 94 shelters recommended last year, only 33 have been approved.

"Some have been ruled out because they have decorative blocks and other mitigating factors," said Tate.

In Hanover, the parish is about 70 per cent ready, but according to Desmond Dorman, the parish's disaster coordinator, all the major drains have been cleaned, shelters identified and inspected, and emergency supplies put in place.

Of the 69 shelters in Hanover, only 64 are available, as five are said to be no longer in a state to accommodate people.

"We have been forced to close five shelters, so we are down to 64. However, the priority shelter, which is the Hanover Infirmary, is in excellent condition," said Dorman. "We have emergency supplies in stock and we have established agreements with supermarkets and shops to have access to food items and other perishable goods when required."

In St Elizabeth, that parish is also approximately 70 per cent ready, but keen attention is being paid to several flood-prone communities.

"We are looking at Newmarket, Big Woods, Holland Bamboo, New Holland and New River in particular," said Claudine Forbes, the disaster coordinator for St Elizabeth. "We are trying to educate and sensitise the residents about flood mitigation and emergency measures."

Forbes also noted that the parish's 89 regular shelters and 18 priority shelters are being readied. The final training of shelter managers will take place on June 23.

In Trelawny, disaster coordinator Deon Lewis Hylton said the parish is close to complete readiness and is on high alert.

"We have inspected 98 shelters and trained 89 shelter managers ... another training session is scheduled for June 15 and 16 for North Trelawny," said Lewis Hylton. "Our Emergency Operation Centre will be at the Roads and Works Department, with the Fire Station being the alternative centre."

In St James, which is also 70 per cent ready, disaster coordinator Tamoy Sinclair is appealing to the authorities for the ambulance assigned to the Emergency Medical Services to be repaired and put back into service as quickly as possible.

"In times of distress, this vehicle will be urgently needed, so it has to be in working condition when required," said Sinclair. "Some 70 shelters have been approved for use in St James and we have final training for shelter managers set for July."

Sinclair said all the major drains in Montego Bay have been cleaned and additional cleaning is set to take place in July and September.

"Our Emergency Operations Centre is the first floor of the parish council building and the Cornwall Regional Hospital has indicated that it has adequate supplies of medication and reserves," said Sinclair.