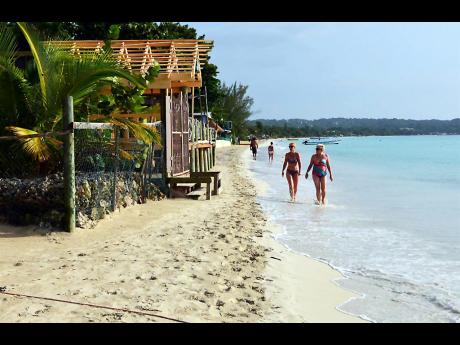 With environmental experts aligned to the United Nations saying that Negril's breakwater could lose its scenic seven miles of white sand beaches to erosion within a decade, preserving and protecting the beaches has become a priority issue for stakeholders in that town.

While the People's National Party (PNP) government, which was recently voted out of office, was seemingly on a path to use breakwater technology to address the situation, entities such as the Negril Chamber of Commerce (NCC), the Negril Coral Reef Preservation Society (NCRPS), and the Negril Resort Board, vehemently opposed going that route, saying beach nourishment would be the better option.

"The breakwater solution would not be ideal for Negril," said NCC director Sophie Grizzle Roumel, referencing experts who have seen the technology failing in other parts of the world. " ... it is really a short-term solution, which has the potential to become a long-term problem."

Using the experience of the Unawatuna Beach in Sri Lanka, which was all but destroyed by the use of breakwater technology after it was voted the World's Best Beach in 2004, the NCC believes that the same thing could happen to Negril.

"The once flawless crescent of sand that swept along a palm-lined shore with turquoise waters is now blanketed with jagged rocks," said the NCC, in declaring that the Sri Lankan government is now desperately trying to reverse their breakwater experiment. "Our preferred option is to go the beach nourishment route, which is a soft non-intrusive procedure, which could be done in four to eight weeks."

In addition to the situation in Sri Lanka, the NCC also identified California, New Jersey and North Carolina as places where breakwater has failed to meet expectations.

However, despite their advocacy, to include bringing in overseas experts to defend their position, much to the chagrin of the Negril stakeholders, the National Environment and Planning Agency (NEPA) announced late last year that the $90 million breakwater project is slated to start towards the end of March 2016.

The Negril stakeholders, who promptly took their objection to the Office of the Public Defender, are now hopeful that with a new administration (the Jamaica Labour Party) in place, they may yet get their wish to put the brakes on breakwater.

"We intend to raise this matter with the new Government because we believe we are on the right side of the truth about breakwater," said Grizzle Roumel. "This is a fight we will never give up because we know we are right."

With NEPA unlikely to back-off without a fight and the Negril stakeholders determined not to let up, the reports by the United Nation's environmentalists remain a grim reminder that Negril's loveable white sand beach is eroding by 0.5 to one metres each passing year.