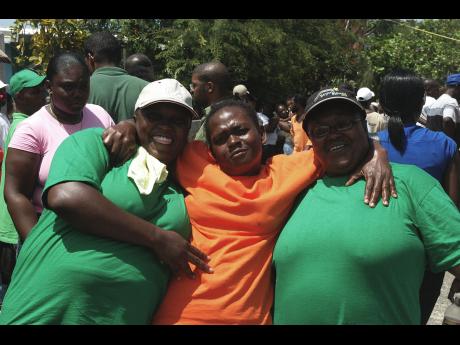 Adrian Frater
In this 2007 file photo, supporters of the People's National Party (PNP) and the Jamaica Labour Party (JLP) showing unity outside a polling station in Mt. Salem, St. James.

With the rumblings on the ground suggesting that local government elections are imminent, the five parishes in the county of Cornwall are poised to fall squarely in the crosshairs of both the governing Jamaica Labour Party (JLP) and the opposition People's National Party (JLP) as they intensify their preparations.

At present, the PNP is the dominant party in the region, having won four of the five parish councils - Westmoreland (14-0), St Elizabeth (9-6), Hanover (6-1), and St James (13-4); and tying the other - Trelawny (4-4). One seat in South Trelawny, the Lorimers division, went to businessman Paul Patmore, who ran as an independent candidate.

Subsequent to the elections, the Trelawny Parish Council also went over to the PNP as Lloyd Gillings, who won the Albert Town division on the JLP's ticket, crossed the floor, giving the PNP a clean sweep of all the parish councils across the island.

However, buoyed by the JLP's success in the February 25, 2016 general election, which saw the party wresting away St Elizabeth (3-1), St James (4-1); and tying Trelawny and Hanover (1-1), Senator Charles Sinclair, the chairman of the JLP's Area Council Four, is confident of much success, even in Westmoreland, where his party was swept 14-0.

"We are very confident ... . Our candidates are in place and we are making sure that they are in a state of readiness to serve," said Sinclair, "Based on the feedback we are getting, I believe you are going to see some surprises - even in some areas where people would not expect us to do well.

"If I could take a term from the PNP, what we are looking at is creating a 'join-up Government', where we have control of both central government and local government," added Sinclair.

While the JLP is bubbling with confidence, it would appear that the PNP is being undermined by dissension within its ranks, especially in Hanover, where some prominent young Comrades are uncomfortable with the leadership style of the party's Region Six Chairman Ian Hayles.

"Ian is out of touch with the reality on the ground and many people see him as a failure," said businessman Craig Oates, the eastern Hanover representative on the PNP's National Executive Council. "Some of the young people are unhappy and are breaking away as independent candidates."

Navorn Samuels, who still considered himself a Comrade, albeit he will be running as an independent candidate in the Green Island division, says he is "sick and tired" of both Hayles' leadership style and his candidate-selection policy.

Repeated efforts by The Gleaner to contact Hayles, who is also the member of parliament for Western Hanover, proved futile.

Outside of Hanover, the parish council seats are expected to follow the pattern of the recent general election, which would seem to suggest that, St James and St Elizabeth will fall to the JLP; and Trelawny and Hanover could go either way. Westmoreland is expected to stay firm PNP.