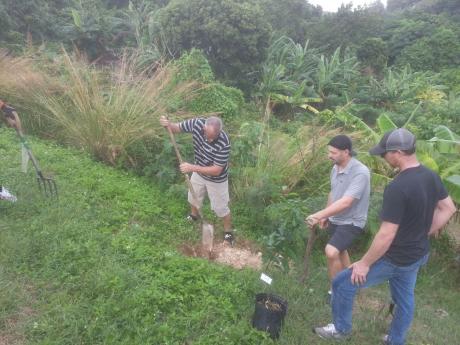 Contributed Photo
Volunteers from Primary Residential Mortgage Incorporated, a mortgage-lending group based in Utah in the United States undertake landscaping and tree-planting works at the SOS Children’s Village.

The SOS Children's Village in Rose Hall, St James, will go into the Christmas season and the new year with a spanking new look, thanks to the upgrading work undertaken there last weekend by Primary Residential Mortgage Incorporated (PRMI), a mortgage-lending group based in Utah, in the United States.

In addition to the facelift, the group also handed out early Christmas gifts to the children, who were highly appreciative of the kind gesture.

"The company and employees are delighted with this opportunity to share with the Jamaican children," said David Zitting, one of the owners of PRMI. "We hope to do much more as we see other needs which would help to address such as putting in solar energy."

The contact between PRMI and SOS was initiated by Amstar Destination Management Company (ADMC), which is based in Ironshore, Montego Bay. The company has had a long-standing interest in the well-being of the children's home, which is a charity-driven entity.

Once the initial contact was made with PRMI, ADMC began the requisite planning, through sales director Michelle Johnson, to get the facelift project moving.

As early as 7 a.m. last Saturday, more than 40 employees from PRMI and Amstar were on location at the children's village, unloading fruit trees, plants, topsoil, fertilisers and farm tools commence the day's work. The team, which was divided into mixed groups of adult males, females and children, covered specially designated areas, ensuring that their plan for the day was fully executed.

As the day progressed, the dorm for teenagers, which was in fading orange, gradually took on new blue and beige hues as Geoff Rooker and Dave and Cathy Shanlian from PRMI led the painting team, which made numerous trips up and down their ladders, to ensure a classy painting job.

After painting the dorm, the painting crew shifted attention to the tennis court and playground, which they also gave a new look. When the painting was over, the entire team went on to planting fruit trees and miniature plants for hedging around the playground.

"We are happy and pleased with what we did here today," said Zitting. "We hope we will get the opportunity to come in and do this for other schools in the near future."

PRMI, which was founded in 1998, has given itself a mandate to help people achieve their dream of home ownership. Since its inception, it has helped hundreds of thousands of families with their home purchase or refinancing needs.