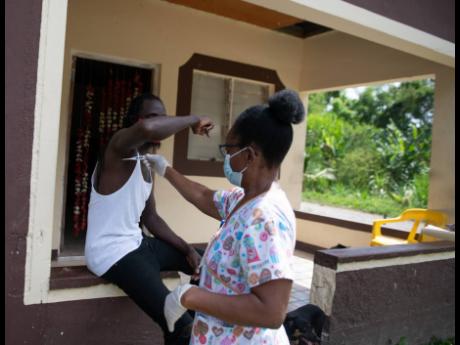 Gladstone Taylor/Multimedia Photo Editor
Ricardo Edwards has his temperature taken by Audrey Hinds-McLeod, one of 70 healthcare workers who went on house-to-house visits in Dover, St Mary, on Saturday, May 9.

The Pan-American Health Organization (PAHO) is concerned about the rapid rate of coronavirus infections as well as mortality from the COVID-19 pandemic in the Americas, with 1.74 million cases and 104,000 related deaths reported in the region up to Monday.

“We are deeply concerned with how rapidly the pandemic is spreading,” director of PAHO and World Health Organization (WHO) regional director for the Americas, Dr Carissa Etienne, said during Tuesday’s update on the outbreak.

“It took our region three months to reach one million cases, but less than three weeks to nearly double that number,” Etienne said.

During the last week, 266,269 additional cases, including 20,000 additional deaths, were reported in the Americas, representing an 18 per cent relative increase in cases and a 23 per cent rise in deaths, week-on-week.

Between May 4 and 11, more than 96,000 additional cases were reported, including 5,552 in South America, representing a 45 per cent relative spike in cases and a 51 per cent jump in deaths, compared to the previous week.

South American health systems in large urban centres like Lima, Peru, and Rio de Janeiro, Brazil, are quickly becoming overwhelmed with a similar impact of COVID-19 on big cities across the Amazon Basin.

Further, transmission is high in areas that function as regional hubs with neighbouring communities becoming quickly affected as people move along roads and across rivers, impacting smaller towns and remote communities, including indigenous zones where access to healthcare is challenging.

“As PAHO continues to coordinate the response across countries, we call on national and local health authorities to work even more closely together to continue to contain the spread of the virus and support health systems capacity,” she appealed.

Etienne noted that several nations, including some in the Caribbean, have shown that the caseload can be contained with strong surveillance and detection, coordinated public health and preventive action, and contact tracing.

“While we remain in this dangerous stage of the pandemic, financial resources are needed to help people cope with the economic impacts of staying at home or being out of work, and this is vital to keeping the virus in check and reducing the duration of this crisis in each country,” the director said.