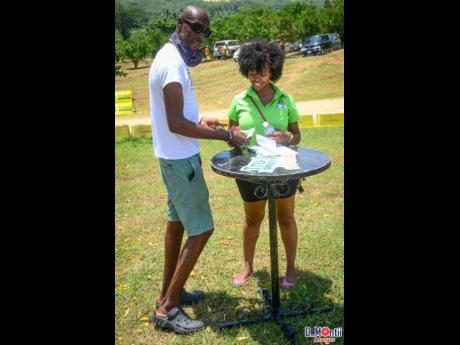 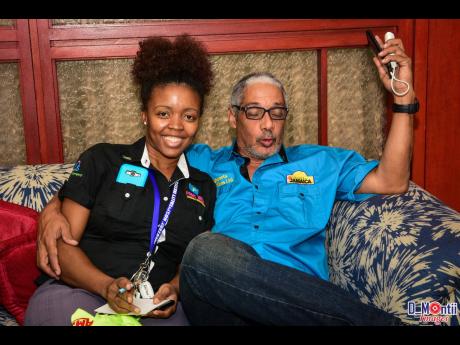 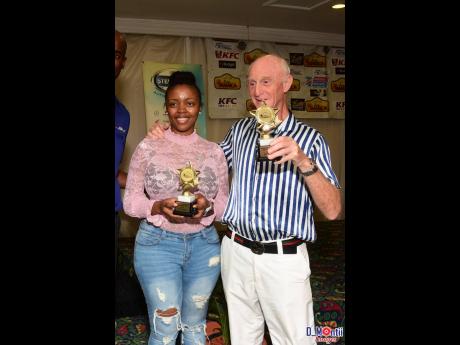 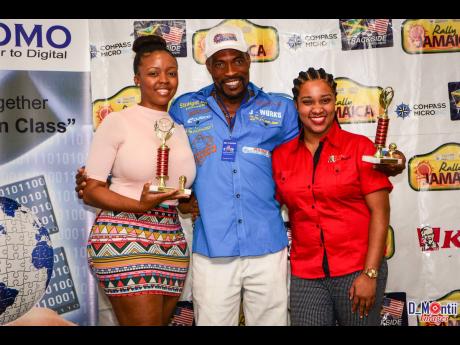 DMONTii
Hamilton and driver Roan Jones showing of trophies received from an event. 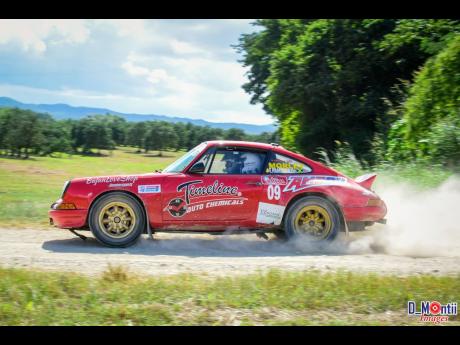 4243352..DMONTii
Hamilton and Harold Morley attacking the rally stage in their weapon of choice, a Porsche 911 rally car. 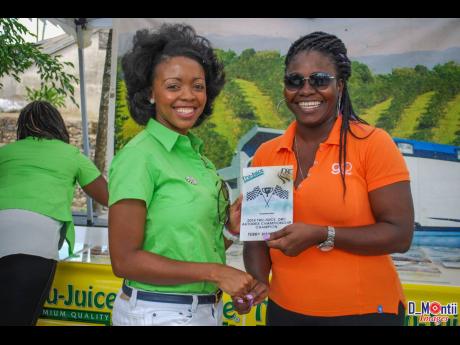 Donovan Montague
Hamilton receiving an award for being the 2014 dexterity champion. 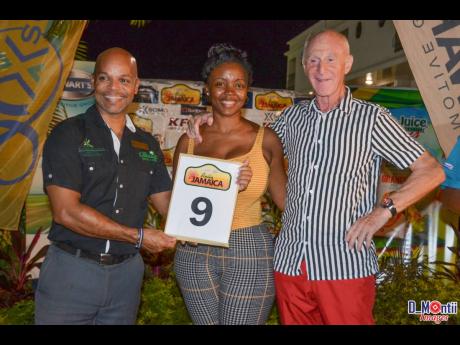 Terry Hamilton, vice-president of the Jamaica Race Drivers Club (JRDC), is a multifaceted individual, who lives and breathes motorsport. She got introduced to racing in 2007, and from there she has been making her mark. “I hung around Team MoBay Racing, then I became a member of the Montego Bay Motoring Club, wherein I served as treasurer. I also served as a marshal at Rally Jamaica for a few consecutive years.”

Hamilton further revealed that, in 2014, she took on the position as the vice-president of marketing and public relations at Drivers Rally Sports Club of Jamaica. “I mean, when I get involved, I get involved because that was when I decided I wanted to compete. In competing I did dexterity events, what they call drifting, so I had a mentor, Morice ‘World Boss’ Whittingham, who taught me the end of the rings.”

She continued, “I navigated for Whittingham as well and Bobby Marshall, who is definitely deep into rally sport. I got my big buss when I started navigating for Harold Morley. He is a British race driver. I was so happy I was there when he needed a navigator for Jamaica. I called notes which earned me the opportunity to do overseas navigating for him.”

Hamilton mentioned that in 2019 she was called to the challenge, to be the director of Dover, as the executive board saw her expertise in various areas. They later elevated her to vice-chairman of the JRDC.

However, she adds that the journey wasn’t smooth sailing as there are a lot of challenges that were met along the way, as a female in the industry. “To be a female motorsport driver in Jamaica comes with limited support, and the recognition needed for the sport is not present. So drivers who want to race overseas do not get the luxury as track and field stars would get.”

She further reveals that it is only when racers win they are recognised. Hamilton also added that there are several young drivers who are naturally talented but they don’t have the support to push them, so they are on the back burner.

“I know a lot of racers who have the skills to compete in different genres internationally, but it can be expensive if they don’t have support from corporate entities and the government. If they recognise motorsport as a sport itself, it will open the gates for all racers, because at the moment female racers are not highlighted.

“For myself, I would definitely race if I had a car, but it’s too expensive for me to own a car and race, so I have to stick to navigating. Additionally, this field is a male-driven sport, which means there are a lot of male egos, so I tend not to be confrontational with people. I just stand on my own and enjoy the sport, because it is something I’ve always wanted to do,” she exclaimed.

Role of a navigator

As a navigator, she ensures that the person she is co-driving with remains on the road. “I do pace noting for the drivers, so we get a route book which entails instructions I have to read, then we create our navigating notes.”

She highlights that her role is to ensure that the driver gets to a particular location on time and ensures that the driver is comfortable and focused on the task, which is to be safe and get over the finish line. “If I forget the note, the driver will be lost, and I have to follow the route book accurately so we don’t get any penalty for cutting the route laid out, and we have to do it as fast as we can.”

When asked if she ever gets anxious while navigating, she stated that she is usually very comfortable and she ensures that when co-driving she trusts them or else anything can happen. “It is important to have a positive relationship with the driver and that they listen to you so you can convey notes. I am a daredevil so once I’m prepared I will smile from the start to finish with the driver.

“I have experience with four different drivers and none of them want their pace note the same way, so I have to listen to my driver. In addition, I have to follow instructions, because when making the pace note they will tell you how comfortable they are with a corner or a turn or a straight. Therefore, I’m responsible for how fast or slow the race is based on how I call the notes,” she mentioned.

Hamilton is eager to start organising race events, as she stated, “For the JRDC currently, because of COVID, we don’t have any major events so I’m yet to show what I can do regarding that.

“There is a board of us so we all have an area of specialisation, but for me I am assigned to marketing and branding and I get support from the president, Junior Barnes. Barnes is one of the most inspirational people I know. He would send me inspirational quotes in the morning to keep me going,” she says.

Hamilton highlights that she hopes to see more unity in the industry, because when people become divided, it is hard to achieve the goals. “In every business we are going to face challenges, but if we come to a common ground, then motorsport will take off.

“I also hope that we will get more recognition from the Government so that motorsport can be a staple in the household of Jamaicans, and that will help to bring income to the country, as we would open up our doors to international racers,” she added.