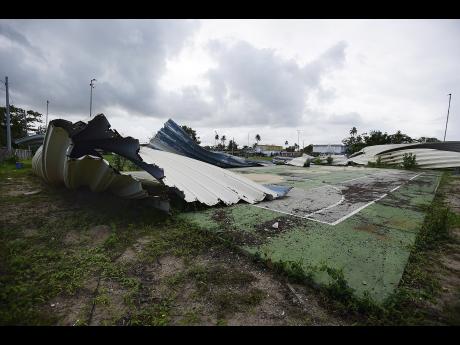 AP
In this October 11, 2018 photo, the basketball court of the Parcelas Suarez community still has no roof a year after the passage of Hurricane Maria, in Loiza, Puerto Rico. 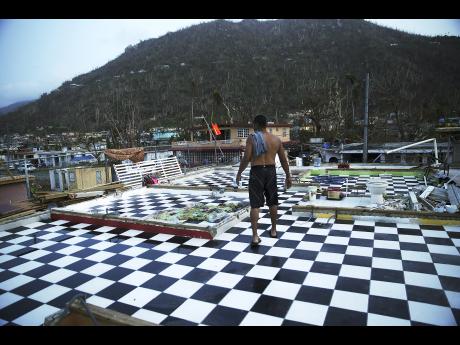 AP
In this September 26, 2017 file photo, Nestor Serrano walks on the upstairs floor of his home, where the walls were blown off, in the aftermath of Hurricane Maria, in Yabucoa, Puerto Rico. Thousands of Puerto Ricans have been forced to drain their savings, close their businesses, or resign themselves to living with structural damage as they fight with insurance companies over storm claims.
1
2

The shortest, or as the crow flies, air travel distance between Jamaica and Puerto Rico, according to www.distancefromto.net, is 1,133 kilometres or 704 miles.

That island, along with Cuba, The Cayman Islands and Hispaniola, is among Jamaica's four nearest neighbours. All four islands are exposed to hurricanes, earthquakes and floods.

Despite their proximity, there are historical, cultural, economic and other differences between them. There are, however, no reasons Jamaica cannot learn from the natural disaster experiences of these countries, or vice versa.

An Associated Press report datelined Puerto Rico published in this newspaper last Tuesday stated that "Thousands of Puerto Ricans have been forced to drain their savings, close their businesses, or resign themselves to living with structural damage as they fight insurance companies over millions of dollars' worth of claims that have gone unanswered or unpaid, more than a year after Hurricane Maria."

That Category 4 hurricane, according to experts, "caught insurance companies off guard and left them reeling financially after they were hit by with nearly 279,000 claims a number that was called extraordinary. One major insurer has already folded, leaving more than 1,500 claims ... up in the air".

The report, if accurate, raises questions about the quality of management of Puerto Rico's insurers and the efficacy of its insurance regulator. The regulator's main function is to ensure the integrity of the insurance system and to provide some level of guarantee that it can withstand the strains imposed on it in the event of a major natural disaster.

The Commonwealth of Puerto Rico is an unincorporated territory of the United States - one of the world's most developed countries with a 170-year-old state insurance regulatory history. The concern about the integrity of the system is not overstated given the frequency of minor earthquake events during the current hurricane season.

If what is reported to have occurred in Puerto Rico is true, are there any safeguards in place to prevent something similar from happening in Jamaica, assuming another Gilbert-like event or the magnitude 7 earthquake that struck Haiti in 2010? Have our insurers and the Financial Services Commission (FSC), the insurance regulator, learnt any important lessons from these events? The Ministry of Finance & Public Service is reportedly developing a policy framework for disaster risk financing. Is what occurred in Puerto Rico last year and the scale of the destruction and loss of lives of any relevance?

The post-Hurricane Irma experiences of the more distant holiday islands of St Martin and St Bart's should also add to the concerns of local insurance buyers. According to a French news agency, citizens and residents of those islands were "still counting the costs of one of the more powerful storms in history and those with insurance were still waiting payouts 12 months later".

In the US, "tens of thousands of Floridians still face insurance 'nightmares' after Hurricane Irma", according to a September 6 report in the Miami Herald.

Twelve months after that catastrophe, "many persons were still waiting on their insurance companies to fix their homes or had to sue them to get payment. There were also complaints from persons living in the Florida Keys of frustrating, expensive and time-consuming fights that have delayed or prevented them from living at home again".

The three independent news reports should be understood in the context of the following:

- "The 2017 Atlantic Hurricane Season was hyperactive and catastrophic and caused damage estimated at US$282 billion. It was the costliest tropical cyclone season on record with over 3,300 estimated deaths. It also featured both the highest total accumulated cyclone energy (ACE) and the highest number of major hurricanes since 2005.

- The season featured 17 named storms, 10 hurricanes, and six major hurricanes. The 2017 season ranks alongside 1936 as the fifth most active season since reliable records began in 1851.

- This season is also one of only six years on record to feature multiple Category 5 hurricanes, and only the second after 2007 to feature two hurricanes making landfall at that intensity.

The Center for Climate and Energy Solutions says that "Although scientists are uncertain whether climate change will lead to an increase in the number of hurricanes, warmer ocean temperatures and higher sea levels are expected to intensify their impacts.

"Recent analyses conclude that the strongest hurricanes occurring in some regions, including the North Atlantic, have increased in intensity over the past two to three decades. For the continental United States in the Atlantic Basin, models project a 45-87 per cent increase in the frequency of Category 4 and 5 hurricanes despite a possible decrease in the frequency of storms."

Given this information, what are local and regional insurance companies doing to strengthen their balance sheets in order to ensure that they will have the financial resources to pay policyholders' claims? What measures have they implemented to efficiently manage potentially large influx of claims when disasters occur? Is the regulator carefully monitoring the effectiveness of these plans or will the system be caught off guard, as happened in Puerto Rico?

Comments were sought from the FSC in relation to last Tuesday's report, but no response was received when this article went to press.