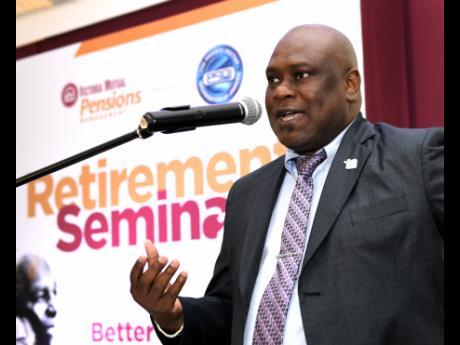 Ricardo Makyn
Everton McFarlane, the executive director of the Financial Services Commission, has defended the agencys independence, but a new report by the IMF speaks to the need to insulate the commission from undue political influence.

Jan Keil is an assistant professor in the Department of Economics at the University of the West Indies. He made his first contribution to this newspaper as guest columnist writing on 'Competition in the Jamaican banking sector'.

In it he offered some new insights into the long-running discussion about local banks. Why do they operate the way they do, offer such poor service to customers, charge high interest rates and impose exorbitant fees? Why do they get away with these transgressions?

The explanations of this economist for the banks' behaviour, in my opinion, can also be applied to some insurance companies. His arguments support my prior warning that consumers should become doubly suspicious when banks and insurers that share the same parents behave like married folks.

Market power abuse exists in the local banking sector. Surprisingly, the banking lobby group has not contested the claim. Why?

According to Dr Keil, "almost 75 per cent of all deposits in private commercial bank accounts are controlled" by the big two banks. These companies use their market power to do whatever they decide is in their best interests, without worrying about competition or how the regulator will react.

Customer service always takes a back seat to profits, despite all the fancy mission statements and the catchy ads.

Some insurance companies also practice market power abuse. They impose conditions that pregnant women must upfront the costs of their pregnancies and recover those expenses when they file claims. This change is introduced after many years of policyholders using their health cards like credit/debit cards.

Technologically speaking this is one example of market power abuse. When a motor insurer takes 12 months to investigate a motor claim when the industry standard is six to eight weeks, and then turns it down, that is also market power abuse.

These are some of the things that regulators like the Fair Trading Commission and the Financial Services Commission must grapple with.

The International Monetary Fund's October 2018 Financial System Stability Assessment Report offers important information and insights that help explain the behind-the-scene 'runnings' of financial institutions as group operations and the entities that regulate them.

These reports are not as 'sexy' as the quarterly and mainly quantitative tests that dominate the news cycle. However, they provide valuable information that is not found elsewhere.

IMF and other technocrats' assessments of the stability of the financial system are intended to help countries like Jamaica "identify key sources of systemic risk ... and implement policies to enhance resilience to shocks and contagion". Put more simply, the IMF helps the government to execute policies that are beneficial to the society.

The following summarises a few of the IMF's comments about the insurance industry and its regulatory body, the FSC.

Regarding the industry, the stability report notes that:

This statement supports Dr Keil's assertion about the potential for market power abuse. It also highlights the need for regulatory action especially in the area of market conduct regulation.

_"The main risks to the financial system arise from exposure to natural disasters and tightening of global financial conditions"; and

_"Non-life insurers are exposed to tail risks stemming from natural catastrophes as the country faces risk from hurricanes and earthquakes. However, in particular, for property insurance, retention levels are low, and more than 90 per cent of the business is ceded to reinsurers abroad."

As for the regulator: "There has been significant progress in the area of insurance supervision. Strengths of the supervisory framework for the insurance sector encompasses surveillance, inspection and enforcement powers, information sharing and co-operation powers, a rather comprehensive supervisory reporting, and strong corporate governance framework (eg fit and proper), as well as the regular dialogue with the Insurance Association of Jamaica," the report said.

"However, there are still significant weaknesses to be addressed in insurance supervision. These include aspects of FSC's (lack of) independence from the government (balanced against accountability); the need to have formal mechanisms to support group-wide risk assessment and supervision; a supervisory approach that is rather compliance-based and less proactive, and that instead should move towards risk-based and forward-looking assessments ... the shortage of skilled staff is a major challenge."

FSC Executive Director Everton McFarlane objected to my September 9 comments that the commission was not independent from the Ministry of Finance & Public Service.

He argued in a letter to the editor that the FSC was a self-financed public body that operates "independently in respect of regulatory decision-making" and that "operationally, we have significant autonomy through our board".

However, he omitted to say who appointed the board members.

Little would he know that I would accidentally discover three months later that the IMF and I share the same opinion on the need to insulate the commission from undue political influence -- which the current arrangement does not necessarily guarantee.