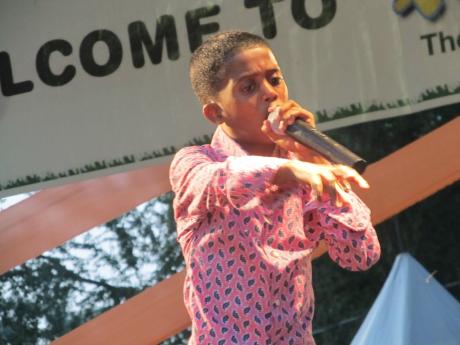 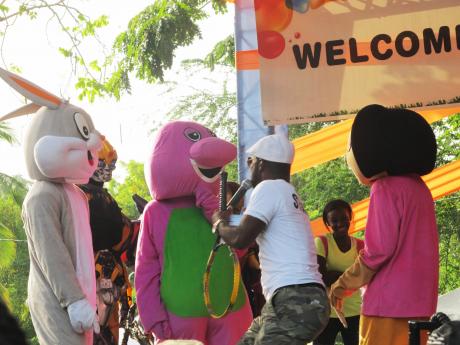 Marcia Rowe
MC Dwight Ross gives last-minute instructions to the mascots before their dance-off with the Transformers. 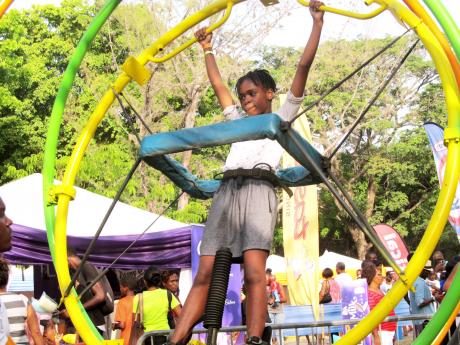 Marcia Rowe
A brave girl waits for the ride to begin at Sunday’s Funfest, held at Hope Gardens, St Andrew. 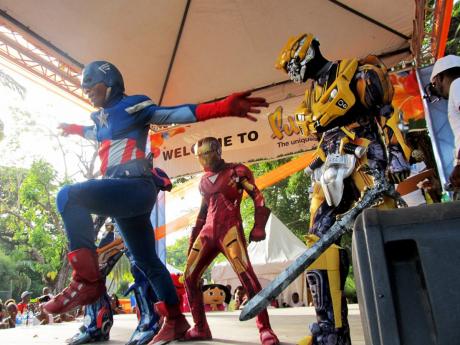 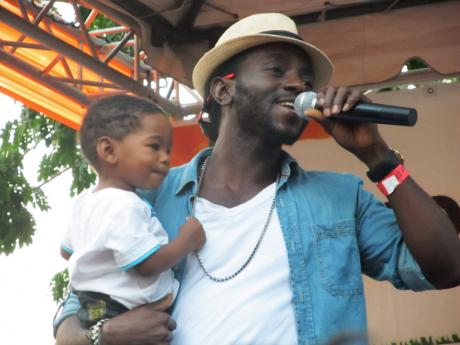 For the ninth time in four years, dazzling company feather banners, spectacular rides, and brightly-coloured tents transformed the pothole-filled Royal Botanic Gardens' (Hope Gardens), main entrance driveway and its surroundings into an oasis of fun. Expanded to facilitate more rides last Sunday, the venue's otherwise tranquil atmosphere was punctured by the sound of lots of happy feet, screams of delight, and live and recorded music. Plus, there was the distinct aroma of food.

All the elements combined created a quiltwork of relaxation and entertainment at Funfest: The Unique Family Edition.

The scheduled starting time was 10 a.m., but the afternoon saw an influx of adults and children. Most of the children were, understandably, drawn to the various rides. With 10 additional new rides, there were many excited children.

The adults were also catered for. Some seemed content to lie on blankets while the children played, while others were more interested in trying their luck at winning prizes. Among the lucky ones was Shana.

Delighted at winning, Shana said that she attended Funfest on the request of her son, who was celebrating his birthday, and on her first visit to the event, she "won a gift basket in Bingo, my favourite games".

But the main area of focus for some people was the main stage, where a fashion show, giveaways, spot prizes, and competitions, interspersed with performances, unfolded. There was a tidal wave of audience members ebbing and flowing from the area, but MC Dwight Ross was marvellous at engaging his constantly expanding and contracting audience.

"Funfest is a real family event. Funfest does not deal with slackness. Funfest is about having fun in a clean way," Ross said before introducing the top performers in the closing segment of the stage show.

The performers were a nice mix of the young up-and-coming, and the established. The young ones were Xylophone, Wayne J, and Klash. All three performed like professionals. While Xylophone may be a bit short on her vocal qualities, she was professional in her attitude and use of stage. Wayne J was definitely the pick of the lot in engaging the crowd - from chatting with his audience to calling on Klash to join him in singing their collaborative summer song. Klash was the best singer of the lot as he demonstrated why he has become a YouTube sensation.

Then it was time for the older performers - Gee Whiz, Chozenn, and Rondell Positive. Gee Whiz was first, and with son Garland securely held, he had the audience singing along. Before informing them that Jesus Christ is the real thing, Gee Whiz said, "We have been around the world and seen it all and there is nothing out there in the world." He thanked artistes like Omari for their influence.

Both Rondell Positive and Chozenn used the opportunity to minister in song.

Chozenn, who was performing for the second time at the show, said he was just humbled to present Christ. He noted that the difference between the Funfest audience and those at gospel shows where he has performed is that the former is mixed and there were a number of people to whom he needed to minister.

"My purpose is young people especially because when I was lost, the devil always tried to trick me and said that gospel music is foolishness. I find out that this is the biggest lie ever." Chozenn told The Gleaner.

Tshani Jaja, CEO of FamFun Entertainment, organisers of the event, said, "I am pleased with the consistency in the turnout and we are experiencing growth. We see larger family groups, and the type of entertainment deviates from what is being heard in the entertainment media." She added: "We have encouraged our partners to also introduce different activities and attractions that can help to engage patrons."

The next Funfest is scheduled for October in Ocho Rios, St Ann.