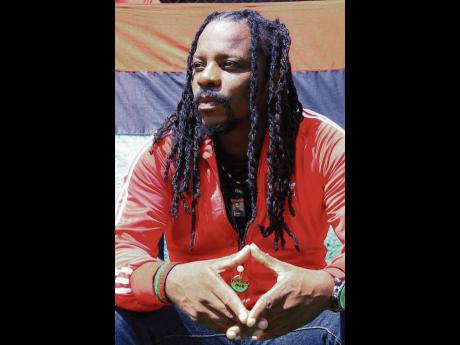 Contributed
Despite not being close with his own mother, Chuck Fenda said he still loves her and that his children hope they will get the opportunity to meet her one day.

In a perfect world, populated by perfect beings, every child has a mother who must be celebrated on Mother’s Day. But the opposite is sometimes the unpalatable reality.

Dancehall artiste Chuck Fenda, born Leshorn Whitehead, has slowly been sharing his truth with the media as it relates to his own mother, who he said was not a part of his life for a very long stretch of his 48 years. At six weeks old, he said he was brought from New York to his grandmother in Jamaica and never had a bond with his mother, seeing her on two occasions which he barely remembers.

However, hope eternal seemed to have been shining for the Eternal Fire artiste recently when he said that the dialogue between him and his mother, who lives overseas, was increasing. He was looking forward to uniting with his parent.

“But I am going to leave her alone,” he told The Sunday Gleaner even as he was making plans to take out four of his children who live with him for ice cream on Mother’s Day and ensure that it is special for them.

“I did an interview on television the other day, and the producer called her beforehand to make arrangements so we could talk on the programme, and what she said, the host didn’t even want to repeat it. She took me to the producer and said, ‘Tell Chuck Fenda what his mother said’. The producer said it and when I hear is like everything inside me just dry up,” he shared.

Taking a deep breath, he recounted being the victim of racism while attending high school in the States, having migrated when he was in grade nine at Jonathan Grant High, and how police would stop him because he lived in a predominantly white neighbourhood. “Then when I started travelling as an artiste to places like Europe, there it was again, racism. Even on the plane, the flight attendants would constantly be checking my ticket because they didn’t think I was in the right seat, all because I travelled first-class. So, those words that the producer told me cut deep,” he said without much emotion.

Fenda, who is dark-skinned, is from a family who is “high colour” in Jamaican parlance, and he now feels that if he were of a different hue, he would probably have stood a better chance. “I am the darkest one in my family, and I remember one of my relatives saying that my grandfather didn’t really like black people and my mother maybe got that from him, so she is not to be blamed. But I’m her son, and it really shake mi heavens. I still love my mother, and despite everything, my children would love to meet their grandmother one day,” he said.

Chuck Fenda said he reveres all mothers, including his own and that on Mother’s Day, he is sending good vibrations to his aunts Cherry and Bev and all who played a nurturing role in his upbringing, as well as “all the good mothers out there who care for their kids”.

“Mothers must be loved, cherished and protected and not having [a] mother in my life, and knowing that she is around, really affected me mentally. Talking about it now gives me a sense of relief. I see in the music business artistes like Shabba and Bounty Killer always ‘bigging up’ their mothers, and I couldn’t do that. I never got to hug her, talk to her about my plans and my successes or failures, or anything important, or even run jokes. But I make sure to do ‘Mama’ songs same way,” Chuck Fenda added.

His 2009 album, Better Days, pays tribute to mothers with a song simply titled Mama, while on his 2016 album Concrete Jungle, Chuck Fenda sings about Mama Love.

He mentioned that he has a brother who is close to his mother and who would want to see the situation resolved, but Fenda doesn’t seem to be holding out much hope. Instead, he is thankful that Rastafari and the spirituality he found therein saved him.

“Right now, I feel so blessed. Rasta showed me humility and righteousness. I still have a lot to learn cause me nuh perfect, and there is also more healing to tek place. But I am thankful for this opportunity to shine again musically. I connect back with the Creator, and all the negative people that used to be around me have disappeared, and I am praying harder than I have prayed before because I am focused on doing the best I can for my own kids,” the father of 11 said.