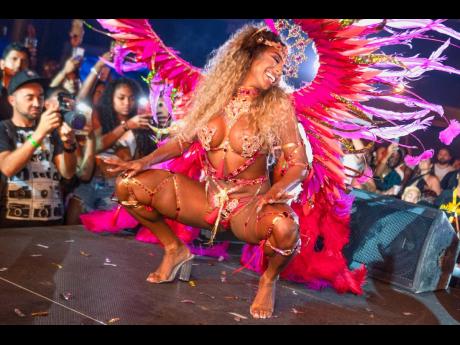 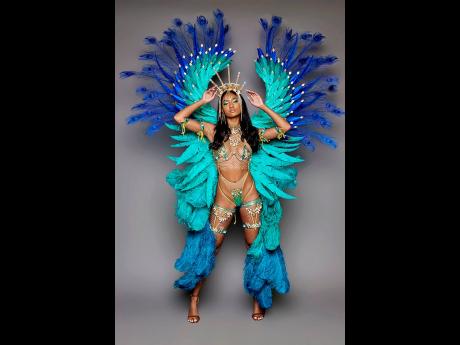 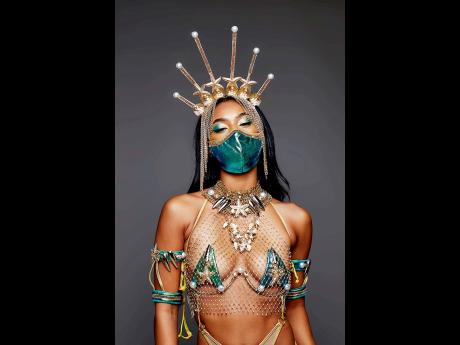 Contributed
The Kalypso costume designed by Jamaica’s Jessica Campbell comes with the option of a mask, coordinated with the aquamarine colour of the section. 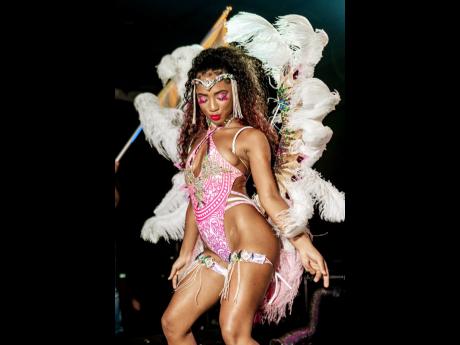 After a prolonged ‘tabanca’, Miami masqueraders and the Caribbean diaspora have circled Columbus Day weekend on their calendars to mark the return of the festive Carnival season during the US holiday. The event is being forecasted to be one of the biggest carnivals of that size, scheduled for 2021.

According to the one band director, Tagyei Belinfante of GenX Carnival, the high level of anticipation is reflected in the number of people who have registered to participate.

“Costumes are moving fast,” Belinfante said in a recent interview with The Gleaner. He also estimated that by the end of this week, the frontline and backline costumes for some bands might be sold out.

“Act now. For a sizeable carnival, it’s not a fight for masqueraders; each band is like a family, and all have persons who gravitate to, or are loyal to them. Of course, there are 20 bands involved overall, all of which would have launched by now, so I anticipate an influx of people from all over, more than what is normally here,” he added.

Belinfante, along with Mark Christian, Matthew Waddell and Ajeni Green – all of Jamaican background – took control of the band formerly known as Generation X, under the guidance of its original founder, Gregory Antoni. Defined as a band that emerged out of a void in the carnival community there, the director said, “We saw the need to introduce an authentic, ultra, all-inclusive experience within a reasonable package,” that embodied more than just costumes. “We have the best talent on the ‘road’ – technically, we are not on the road, but inside the extremely large Miami-Dade Fairgrounds — and make sure we play music from all the islands, including dancehall, keeping in [the] spirit of carnival.”

In 2019, when the rebranding occurred, the band pulled a record when it played host to 1,300 compared to the previous year, which only had 300 masqueraders. Overall, there was a total of approximately 12,000 masqueraders participating in Miami Carnival.

GenX Carnival’s theme is ‘Immortals: Gods Never Die’ and features 10 sections: Artemis, Athena, Dionysus, Electra, Hecate, Kalypso, Kratos, Persephone, Psyche and Selene, which have commissioned the service and creativity of several costume designers throughout the Caribbean, including Carnival central islands Trinidad and Tobago, Jamaica, Barbados and the Cayman Islands, among others. By the launch held on Saturday, June 26, the band had preregistered 500 persons.

“Collectively, I believe all the bands want to be epic. I am proud to be part of, and proud in general of, Miami Carnival because all the bands came out strong this year … . I really don’t see no fool-fool costumes. Everybody got the year to kind of regroup, and some bands even formed partnerships,” Belinfante said.

They are partnering with another band, Love Peace Soca, to provide a service that masqueraders can sign up for to have their costumes and backpack delivered for free. The pandemic is not completely out of mind, he said, but as a party promoter in the state, he expects there will be fêtes for persons to attend every single hour.

“Restrictions keep changing as the cases of COVID-19 are decreasing. The biggest thing about Miami Carnival is that you can always find a hotel, whether in South Beach, downtown or midtown Miami, and we will be capitalising on that soon by offering hotel and Airbnb specials,” he continued.

According to Joan Hinkson-Justin, of the Miami Broward One Carnival Host Committee, work is taking place with the various counties and organisers of the festival to ensure safety as the highest priority.

“Our committee has been diligently working with both Miami-Dade and Broward counties to ensure that we can plan our cultural event, with the health and safety of our stakeholders and patrons as a key part of that plan,” said the chairperson in a press release published by CBS Miami.

“We are excited to once again be able to showcase the Miami Carnival in person. We have missed being able to present our pageantry, music, and Caribbean culture with everyone,” Hinkson-Justin continued.