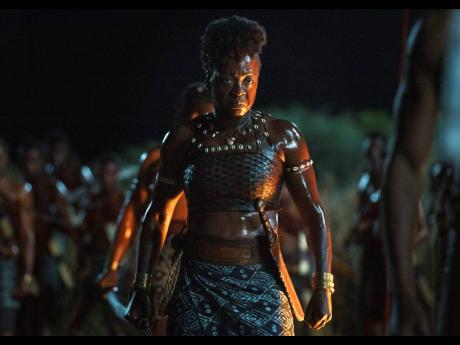 Making a historical epic is tricky. While the words “based on a true story” will always invoke intrigue, most true stories don’t have the narrative throughline needed for a satisfying major motion picture. Liberties get taken to flesh out the plot and characters, and suddenly, the true in true story is better served with an asterisk.

The Woman King is no different. For the sake of the narrative, the Agojie warriors, an elite squad of female warriors sworn to protect the kingdom of Dahomey, are presented as heroic. The film acknowledges their part in the slave trade, but downplays it significantly. The characters treat it as an evil they wish to be rid of, yet by all accounts, this depiction is fiction.

Make no mistake, the women warriors it depicts did, in fact, exist and, by all accounts, are as fierce and formidable as the film suggests. The opening scene sees them appearing as figures from myth, emerging from the shadows of the savannah to rescue their people from the clutches of a neighbouring group. It’s a gripping beginning as they tear through their foes, moving as a nigh unstoppable unit.

The warriors are led by their general, played by the incomparable Viola Davis. Among them are Jamaica descendant Lashanna Lynch and Ugandan actress Sheila Atim. The trio are in charge of training the new crop of Agojie warriors, just in time for the conflict brewing on the horizon.

Each character has their part to play in the plot, but they’re chock-full of personality all on their own. The performances give the characters a tactile feel, with Davis leading the charge with an emotive and powerful portrayal. The cast immerses you into this world, and you find yourself caught up in their drama on display even when there’s a clear sense of a manufactured tale.

Much of what The Woman King has to show is not quite true for a movie that touts authenticity in its marketing. That’s most evident when the character drama takes a turn for the fanciful, making it easier to take the movie as historically inspired fiction. Yet the delivery by the cast is so honest and pure that it’s easy to get swept up in it. I wouldn’t recommend referencing The Woman King as a source, but for a film with heroic women that’s steeped in characters that feel tactile, and yet another performance that makes me feel privileged to live in a time with an onscreen force like Viola Davis, The Woman King, is an exhilarating watch.

Damian Levy is a film critic and podcaster for Damian Michael Movies .