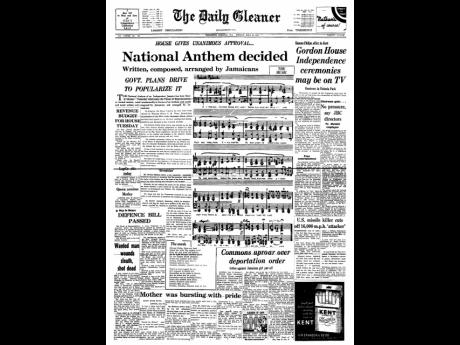 The Daily Gleaner front page of July 20, 1962 with the words and music of the Jamaica National Anthem.

Jamaica’s National Anthem, created by Hugh Sherlock, was an instant hit, with many recognising the significance of having an all-Jamaican cast as the producers of the content. That fact was not automatic in 1962 and the National Anthem actually had competition.

THE National Anthem of an Independent Jamaica has been finally chosen. Yesterday afternoon, The House of Representatives, in formal session, voted unanimously in favour of an Anthem with words and music written and composed by Jamaicans and arranged by Jamaicans.

In doing so, the House rejected the tune with words offered by Warrant Officer E.H. Wade, British-born Bandmaster of the West India Regiment Band, which members had agreed at an informal meeting in June, should be put forward as the National Anthem.

The National Anthem which, will be sung officially for the first time when Jamaica becomes independent on August 6 is from words written by the Rev. Hugh Sherlock and from music composed by the Hon. Robert Lightbourne, Minister of Trade and Industry, as put together and arranged by Mr Mapletoft Poulle, Kingston solicitor and musician, and Mrs Poulle.

The selection represents a victory for the joint committee of the House of Representatives headed by the Premier, the Hon. Sir Alexander Bustamante, which had previously selected the Anthem that won favour with the House yesterday.

During a brief discussion in committee yesterday, members of the House expressed the view that this Anthem had been presented under unfavourable conditions when they heard it originally in the lounge of the House.

But before the sitting began, members of both Chambers of the Legislature heard the two anthems at St. George’s Church, Kingston. Performances were by the Police Band as well as an organist and singers.

Mr Norman Manley, Leader of the Opposition, complained during the discussion in committee that the procedure which took the matter of the Anthem out of the hands of the House in formal session into other meetings was unfortunate and irregular.

However, he had nothing but praise for the Anthem which the House selected, a point echoed by the Hon. Edward Seaga, Minister of Development and Welfare, who emphasized that he had always been for it.

Mr Seaga said that the Government proposed to put into effect a crash programme to popularize the Anthem before August 6.

Mr Florizel Glasspole, Opposition Member of the House of Representative for Kingston Eastern, who like Mr Seaga was a member of the joint committee, regarded the editorial in the July 19 Gleaner on the subject as unfortunate.

He did not want it to go out that the other Anthem had not been chosen because the composer was an Englishman. He urged some sort of monetary compensation for Mr. Wade because of his effort and expressed the hope that the Wade Anthem would become in due course a national song.

The House then gave its approval to the Anthem.

Guard her with Thy Mighty Hand,

Keep us free from evil powers,

Be our light through countless hours.

To our Leaders, Great Defender,

Grant true wisdom from above.

Justice, Truth be ours forever,

Teach us true respect for all,

Strengthen us the weak to cherish,

Give us vision lest we perish.

Grant true wisdom from above.

Justice, Truth be ours forever,