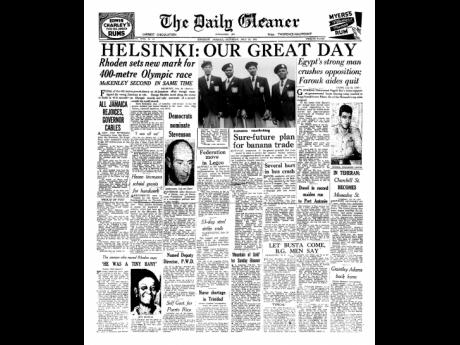 When George Rhoden and Herb McKenley crossed the tape of a 400-metre race at the same time in Helsinki, Poland almost 69 years ago to the day, it created a tradition for a little country at the Olympics. Whenever we were there, we would leave a mark, somewhere, somehow.

Final of the 400 metres proved almost an all-Jamaican affair though many tipped the wrong Jamaican to win. George Rhoden raced along the course to finish in 45.9 seconds, an Olympic record and only one-tenth of a second outside his world record.

Herb McKenley, also of Jamaica and second in the 100 metres, finished just behind Rhoden in the same time. Ollie Matson, coloured American, was third.

Long-striding Jamaican Arthur Wint, holder of the title and probably the most highly favoured by-experts to win, had to be content with fifth place, coming in behind the German, Karl Haas. Mal Whitfield, 800 metres champion was sixth.

Wint led for part of the race but appeared to have made his great effort too soon and was passed in the final spurt. Whitfield could not match the speed of his rivals in the short race.

After the race, Rhoden said: “I did not relish being drawn on the outside lane for I knew I had to make my own pace. I made a good start and from then on I was all out to get to the tape first. It was the hardest race I ever had and I felt extraordinarily tired at the finish.

Then Rhoden added simply: “It was the proudest moment of my life”.

Herb McKenley was annoyed with himself. “I threw it away,” he said. “I was really running smoothly and I thought I could afford to slow down. But I relaxed too much. But I am confident of one thing, I am going to break the world record before going back to the United States towards the end of August. My form is improving all the time and I am sure I can do it”. All in all, it was Jamaica’s day here.

A cable went to Helsinki yesterday from His Excellency the Governor, Sir Hugh Foot, after Jamaica’s victory in the 400 metres race at the Olympics.

Addressed to Mr Herbert Macdonald, manager of the Jamaica team, the Governor’s message said: “All Jamaica rejoices in this magnificent triumph.  Please tell our runners that the wonderful news has been received here with the greatest pride and enthusiasm.”

Sir Hug’s cable was the first of many that left the island conveying Jamaica’s congratulations to the team and particularly to Rhoden.  McKenley and Wint on their achievement.

An early message went from Mr H. Fagan, Mayor of Kingston and St. Andrew, sent to Arthur Wint, in his capacity as captain of the Jamaica team at the Games, the message ran.

“On behalf of Mayor and Council representing citizens of Corporate Area extend to Jamaica team best wishes.  Hearty congratulations to Rhoden and McKenley for wonderful victory in 400 metres.”

Congratulations of the local commercial community were sent on their behalf by the Hon Richard Youngman C.B.E., president of the Jamaica Chamber of Commerce Ltd.

A message from Mr and Mrs Norman Manley and their son. Mr Michael Manley went to Rhoden McKenley and Wint.  It said:  “Jamaica is proud of you.”

Cabling Wint, McKenley and Rhoden, The Peoples National Party said: “Proud congratulations your glorious feat.” Messages were also sent by the Gleaner and the Star to the team expressing pride and joy at the “great triumph”.

Flags flew in downtown Kingston as the Chamber of Commerce, at the request of the Mayor, called upon its members to make a sign of celebration in honour of the occasion.

Setting the example, the Mayor ordered the Union Jack to be hoisted above the Corporation’s main office on Church Street and above its sub-office at Halfway Tree St. Andrew.

Government offices and business houses followed the lead and by noon the city was gay with the British ensign fluttering proudly in the slight wind of a summer’s day in Kingston.

Mayor Fagan also made a move to have a holiday proclaimed to celebrate the victory. In a telegram to the Governor, he said several presentations had been made to him by members of the Council and by citizens.

"I urge that you give favourable consideration to this application”, he told Sir Hugh, passing on the expressed desire for a fitting celebration of this outstanding world Olympic event.”

The Mayor was among the thousands of eager Jamaicans who sat with ears glued to the radio yesterday morning to hear what performance the great Jamaican trio would put up in this Blue Ribbon event of the Olympics.

"It was a great race and It was won in great style by a great little people". His Worship said. "Nothing short of a public holiday should mark this great occasion."