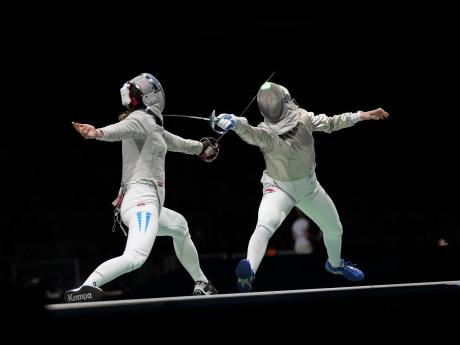 AP Photo/Hassan Ammar
Maria Belen Perez Maurice of Argentina, left, and Anna Marton of Hungary compete in the women's individual round of 32 Sabre competition at the 2020 Summer Olympics, Monday, July 26, 2021, in Chiba, Japan.

An Olympic fencer received a marriage proposal after losing her match.

Maria Belen Perez Maurice's hopes of winning a medal for Argentina in Tokyo were dashed after she was beaten in the women's sabre individual but her mood was improved when her coach Lucas Guillermo Saucedo popped the question.

Saucedo interrupted his partner's TV interview with a large handwritten note that said 'Do you want to marry me?' in Spanish.

Perez Maurice said: "They [the press] told me to turn around, and he had the letter. I forgot everything. I was like, 'Oh my god.'

"We are very happy. We are very good partners. Of course, we have fights, but we enjoy each other's time. We love each other so much, and we want to spend our lives together."

Saucedo believes it was the right moment to ask his partner for her hand in marriage, even though her Olympic dream had just been ended.

He said: "I love her, and when she lost the match she got very sad, so maybe this proposal should change her mentality. I wrote on the paper in the moment. If she had won, no, I would have waited for the moment."