Water for Christmas! - UWI says goodbye to the days of frequent lock-offs 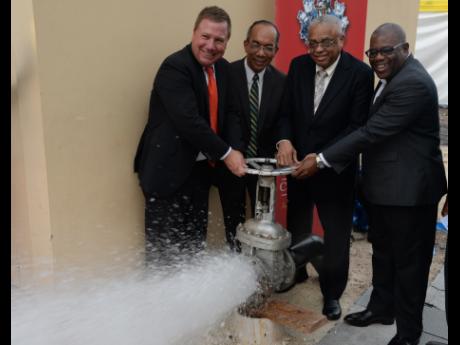 The Mona Campus of the University of the West Indies on Thursday commissioned into operation a well that will supply the campus with water.

The more than 850 feet deep well comes into operation just in time for Christmas and is expected to supply up to 720,000 gallons of water per day to the entire campus, including the halls of residence.

For decades, frequent water lock-offs and intense droughts have caused the campus great inconvenience and frustration.

Students often complain about the lack of the precious commodity, but the university has not always been able to respond because of resource constraints.

The issue has been so bad on the campus that principal, Professor Archibald McDonald, told those attending the commissioning ceremony that he witnessed a female student, a resident of the Rex Nettleford Hall, carrying a bucket of water.

"I asked her what is it [that] she is going to be doing with that. She replied that she was going to carry it to either the 5th floor or the 6th floor of (one of the halls). I got so mad!" McDonald said.

With that being the reality, the principal said he was determined to make it better for student residents. As such, he sought a public-private partnership.

McDonald said the university was introduced to North Star Development, and a working relationship was forged with the company, which would eventually construct the well for $15 million.

The well is expected to save the university some $150 million annually.

"We might also even be able to sell some of the water to the National Water Commission," McDonald quipped as he made known the university's consideration of making a profit from the well.

Minister Without Portfolio in the Ministry of Economic Growth and Job Creation Horace Chang, who spoke at the ceremony, said he was encouraged that the UWI had embarked on solving the long-standing problem.

The minister said the UWI had his support in perusing its endeavours, but called on the university administration to reposition the institution to be a critical player in innovation by providing more training for engineers.

"I do look forward to seeing the university as a critical player in the programme of growth for this country and really moving us beyond the cycle of poverty which has characterised us in the post-Independence years," Chang said.