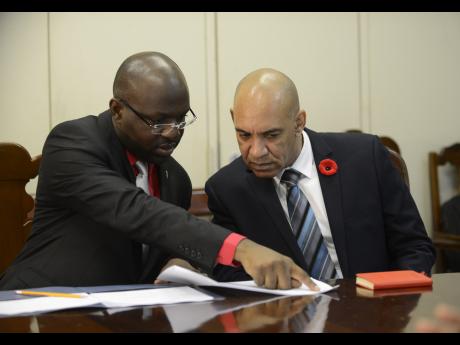 Gladstone Taylor
Chairman of the Firearm Licensing Authority Antony Anderson (right) in dialogue with the CEO of the agency, Shane Dalling, at the press briefing last Friday.

New chairman of the Firearm Licensing Authority (FLA), retired Major General Antony Anderson, is warning employees of the entity and persons applying for gun permits that it will not be business as usual.

The FLA has been embroiled in controversy after irregularities were found relating to the issuance of firearm licences to people deemed unfit, which is the subject of ongoing police investigations.

Anderson, who is also Jamaica's national security adviser, says he intends to spare no one as he tackles the mandate handed down to him and the other members of the new board by National Security Minister Robert Montague, which is to "give the people of Jamaica an FLA that they justly deserve".

"Unscrupulous people who are applying for weapons and those who are supposed to be guarding the gate; the members of staff who may have thought about doing something inappropriate, they should think otherwise," Anderson told The Sunday Gleaner.

Anderson is joined on the board by retired civil servant Ena Rose, retired Senior Superintendent of Police Albert Edwards, banker Aneacia Neita and retired senior puisne judge, Justice Marva McIntosh, who is serving on the board for a third time.

Minutes after announcing the new FLA board last Friday, Montague told The Sunday Gleaner that Anderson was selected to chair it given his 30 years military experience, with more than six of those spent at the helm of the Jamaica Defence Force.

The inclusion of investment banker Neita on the board has been deemed vital after an amnesty, which allowed persons who had not renewed their firearms permit and paid the requisite fees to do so without facing prosecution, netted more than $28 million. Some of that money has been used to digitise the FLA, including the installation of a fingerprint machine.

"We are looking to use the monies first of all for the benefit and service of the clients we serve, and then also to contribute to the coffers of the government."

CEO of the FLA Shane Dalling further pointed out that the ballistics of the guns that were taken in during the amnesty were also taken, while the hunt is on for those that are still unaccounted for.

"As it relates to those who have not come in, the police along with the FLA are now on the road and we are visiting the persons house to house to find the holders," said Dalling.

"So far we have found that many of these persons in the Kingston and St Andrew area are dead, and we are now retrieving the firearms from the homes. A very few we found are overseas and so the drive continues. I have spoken with the commissioner of police and we are now going islandwide as it relates to recovering those that are still out there."

Montague also confirmed a Sunday Gleaner report that proper checks and balances were not in place at some of the island's ranges, making it possible for ammunition to end up in the hands of criminals.

"We have moved to increase the accountability for ammunition in this country," said Montague, as he pointed out that just over 13 million 9mm rounds were imported last year.

"What we have discovered is that not all the rounds are being used on some ranges and, therefore, there is that leakage. There is another possible leakage where persons would go on to a range and empty their magazines, then they purchase rounds and fill their magazines and walk away.