Reputed gang leader shot as he was leaving gym 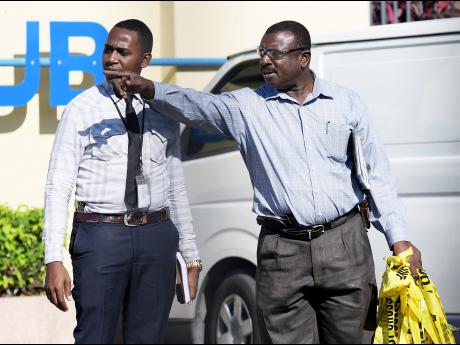 Ricardo Makyn
Detectives in the parkig lot of the Spartan Health Club, where Uriel James better known as 'Rooksie' was shot by gunmen yesterday.

The security forces have stepped up patrols in sections of Rose Town and surrounding areas in the south western section of the Corporate Area since a reported ambush attempted on reputed major gang leader Uriel James, better known as 'Rooksie' yesterday morning.

Persons attending the popular Spartan Health Club in St Andrew had to scamper for cover as two gunmen opened fire on James as he was leaving the facility at about 7:50 a.m.

Reports are that James was leaving the gym when two men dressed in hard hats and vests approached him and opened fire. He was hit in his side as the men fired a hail of bullets.

"Me dung a dah plaza deh and me siddung in a me van and me hear whole heap a shot, and by the time di shot dem done fire, me see whole heap a people come out and a look," said a man who was in the vicinity of the health club.

He told our news team that armed guards from a popular security company were passing and responded to the gunfire. They were able to accost and disarm two men believed to be the shooters. They were later turned over to the police.

"By me look, me see the security have the two man dem pon the ground and hold dem gun pon dem till the police dem come and take dem," said one person outside the health club yesterday morning.

According to reports from the police a Ruger pistol, a Glock pistol and 22 rounds of ammunition were seized.

Police sources told The Gleaner that James was taken to hospital for treatment, but his injury was not considered life threatening.

James, the reported leader of the deadly 'Discipline Gang', based in Rose Town, has been freed of two of three murder charges since being arrested some three years ago.