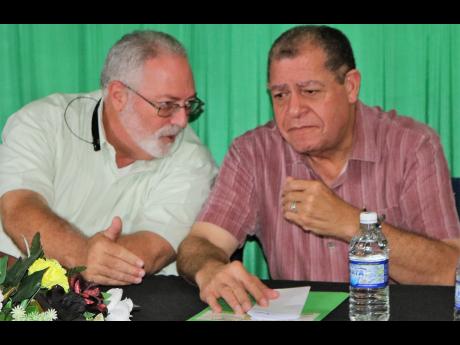 A little over two years after his predecessor Karl Samuda assured the European Union (EU) that its $12-billion funding of the Sugar Transformation Unit (STU) was being properly managed, portfolio minister Audley Shaw is seeking answers about the operations of the entity.

The STU was set up to finance a range of projects geared at capacity building in sugar-dependent communities, and questions have lingered about how the money is being spent.

"I can make it public, Dr Charoo, that I'm one step ahead of you. I have already written formally to the auditor general and to the Public Accountability Inspectorate (PAI) of the Ministry of Finance, that's an inspectorate that I set up when I was there.

"So both the PAI and the auditor general have been requested by me, in writing, that I want the Sugar Transformation Unit to be audited. They are the cover so if they are being audited, then the Cane Expansion Fund will automatically be audited as well," Shaw told a post-crop review seminar hosted by the Sugar Industry Authority last Thursday.

Following their joint presentation, they were unable to provide satisfactory answers to two key issues of interest to industry stakeholders.

Their declaration that loan repayments by cane farmers for 2017 had been frozen, as a result of a ministerial decision, and that only 36 per cent of the outstanding 2018 loan portfolio had been collected, triggered a barrage of questions, which remain largely unanswered.

The decision by Samuda to suspend the 2017 payments was informed by the effect of drought on crop yields, which depressed throughout for the Long Pond Sugar Factory in Trelawny and Monymusk in Clarendon, as well as farmers' earnings.

The poor conditions affecting the industry in 2017, coinciding with the loss of preferential access to the EU market in October, improved only marginally this year, which again prompted an intervention by Samuda, at the behest of representatives of the cane farmers.

This time, the decision was taken to collect 80 per cent of the outstanding loans, but at March 31, 2018 only 36 per cent, less than half the projected revenue inflow, was collected.

In June 2016, Samuda, in a meeting with Jesus Orus Baguena, head of cooperation for the EU delegation to Jamaica to discuss aspects of the STU operations, acknowledged inefficiencies in relation to the allocation of loans under the Cane Expansion Fund.

Samuda gave the assurance that recommendations made by auditors following a 2012 management audit were being implemented.

Now Shaw, who took the reins of the agriculture ministry in March, has signalled his discontent, but the former finance minister did not share the reasons for his decision to request a forensic audit.