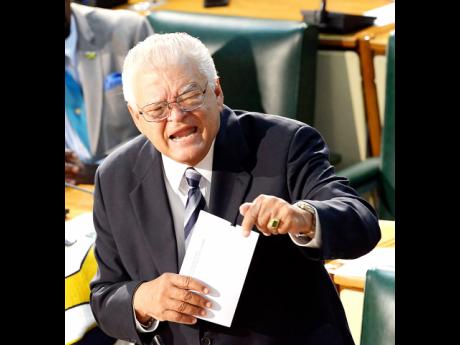 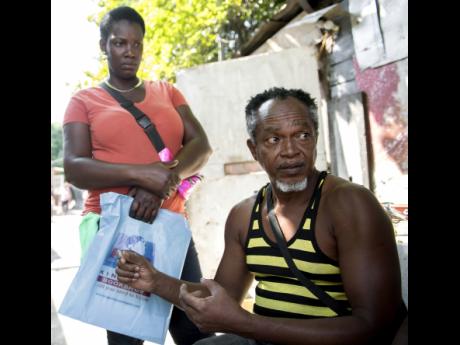 Gladstone Taylor
Michael Reid (right) and Rehona Rumble are among residents of 591/2 Lyndhurst Road in the Corporate Area, which is one of the squatter settlements the Government is trying to acquire and regularise.
1
2

Minister without portfolio in the Office of the Prime Minister Karl Samuda, who has responsibility for housing and lands, has warned that the Government will not be bullied into paying for lands where there is suspicion about how it was acquired.

According to Samuda, some persons who have acquired lands in suspicious circumstances are pushing the State to pay them millions of dollars to acquire the properties, which have been captured by squatters.

Samuda told The Sunday Gleaner that the question of ownership and the prohibitive costs being demanded by those who claim to be the legitimate owners have slowed attempts at regularisation of some squatter communities.

He pointed to a Corporate Area property which the Government has been trying to acquire for some time to regularise the more than 100 persons squatting there as one of those where the process has been stymied by the alleged owner.

"What you find is that over time, the property becomes much more in demand and then they come and claim it. A judge then rules that the people must be evicted and left homeless. But we have the option to use the Compulsory Land Acquisition Act and we will not hesitate to use it," said Samuda.

He noted that once land has been declared and gazetted under the Compulsory Land Acquisition Act, it provides protection for individuals who have been living there for more than 20 years.

"A lot of these younger judges have not availed themselves of legislation that was promulgated in 1977 (Local Improvement Community Amenities Act) by the late Anthony Spaulding. I supported it, although I was in opposition.

"It really revolutionised, as a policy, provisions whereby persons who have been living on lands for more than 25 to 30 years could not be bulldozed overnight," added Samuda.

"That law grants them protection. Gives them a sense of hope towards future ownership. So my job now, since I have been transferred to this ministry, is to ensure that the hundreds of untitled properties falling into this category that they are given titles," he declared.

settlements, said the Government is "actively engaged in setting up a system where the ownership of all these lands, where persons have been living there for years, will be put in the hands of the people".

Samuda noted that the law allows for infrastructural development by the State of these squatter settlements with the provision of roads, water, and electricity.

"All of those things we will do to ensure that we develop a community that is properly structured. And that's my mission," he vowed.

The problem of regularising squatter settlements on properties were questions surround the ownership of lands was one which also faced the former administration, and Dr Morais Guy, who served as the housing minister, told The Sunday Gleaner that in several instances eyebrows were raised about how properties were acquired by those who held the titles.

He said without proof of impropriety, even with overwhelming anecdotal evidence, the Government had no choice but to pay up.

"One will have a challenge when you are seeking to ascertain the owner, especially when you hear of more than one owner. That would pique your curiosity. But you will recall, there were difficulties at the titles office where it emerged that people would get titles for properties that did not really belong to them," said Guy.

"In instances where persons squatted on private property for a significant period of time, the Ministry of Housing had undertaken to buy the properties from the owners and then regularise occupants," added Guy, as he noted that persons tended to produce titles once the Government decided to act.

Citing the case of Angels Estate lands in St Catherine, Guy noted that the Government acquired a section that was under private ownership and occupied by squatters.

He said several properties have been purchased to regularise squatters communities but some remain in dispute because of the price being demanded by the owners.

"Everybody believes that when they have something to sell Government, they must do so at the highest price, irrespective of how they got it," said Guy.