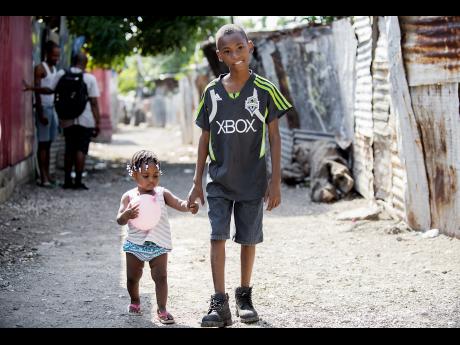 Gladstone Taylor
Two of the estimated 80 children who are facing eviction from a property at 591/2 Lyndhurst Road in East Central St Andrew. 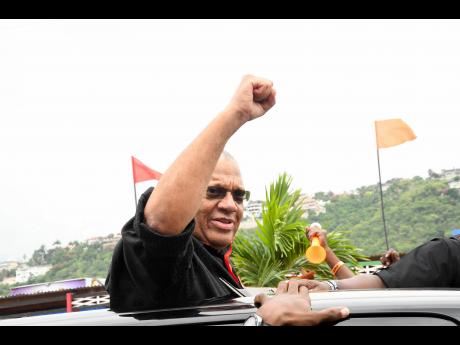 Member of Parliament for St Andrew East Central Dr Peter Phillips has vowed to do all he can to assist residents of 591/2 Lyndhurst Road who are facing eviction.

According to the six-term MP, he is aware of the challenge facing the residents of the property in his constituency, some of whom have been living there for nearly 50 years.

Last week, some residents of the property, who have traditionally voted for the People's National Party (PNP) which Phillips now leads, charged that their party had not done enough to ensure that they had security of tenure.

"I can't believe that the PNP was in power so long and we had a senior Cabinet member, Dr Peter Phillips as our MP, and all that was needed was that the Housing Act was used to regularise our living here," said one resident who asked not to be named.

But Philips later told The Sunday Gleaner that he is working tirelessly for the matter to be resolved in favour of the residents.

"My position is that I am definitively and irrevocably on the side of the people who are being threatened with eviction. It is an injustice which too many Jamaicans have to bear, when they are only trying to protect themselves and their families and give them some stability," said Phillips.

"And that's why for me, the whole question of land titling and the elimination of the so-called squatting problem is central to the needs of the country going forward," added Phillips.

He noted that a similar situation is facing occupants of 54 Lyndhurst Road, and charged that this is a common problem across the Corporate Area and the rest of the island.

Phillips said once the eviction notices were served on the residents at 591/2 Lyndhurst Road, legal representation was secured on their behalf.

"We had been in touch with minister (Horace) Chang when he had responsibility for the housing portfolio, requesting that the property be declared under the Communities Amenities Act, which would prevent the people from being evicted, and would enable the Government to settle with the owner in a negotiated way," Phillips told our news team.

He said there was no response from Chang but with the change of ministers in charge of the housing portfolio, discussion resumed with Karl Samuda, who also faced the prospect of some residents of his St Andrew North Central constituency being evicted from premises on Red Hills Road.

"During last week he (Samuda) assured me that an inspection will be done of the property shortly with the hope of a resolution soon. So I am going to be in touch with the attorneys so that this can be made known to the courts," stated Phillips, who is also the leader of the opposition PNP.

The PNP has named a commission to study the issue of land titling in Jamaica and Phillips said a preliminary report has been provided by the team, which has proposed amendments to existing legislation.

According to Phillips, the issue of landownership will be a priority of the PNP when it returns to power, as at least a quarter of the population is living in similar circumstances and this is at the heart of people's sense of injustice in Jamaica.

"These are persons who have occupied lands form sometimes more than two generations, and to be served with notices to quit disrupts everything that they know to be normal for them and their families," said Phillips.

Scary for squatters! - Residents of Lyndhurst Road property fighting eviction from the only place they ever called home
Massive Fire on Lyndhurst Road Leaves 15 Homeless