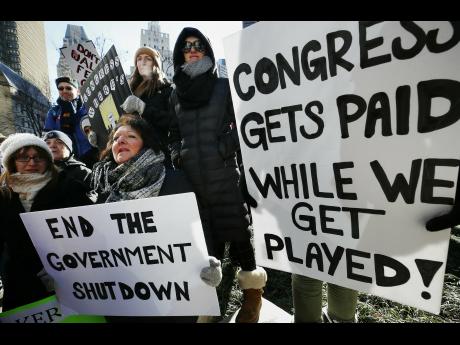 The partial shutdown of the United States Government has started to impact operations at its embassy in Kingston, but Jamaicans will continue to have their visa applications processed, at least for now.

The US State Department has indicated that while visa services will continue for now, this could change if the shutdown, which has already stretched into 23 days, continues for much longer.

At the start of the shutdown on December 22, the US State Department posted on its website: "At this time, scheduled passport and visa services in the United States and at our US Embassies and Consulates overseas will continue during the lapse in appropriations as the situation permits.

"We will not update this website until full operations resume, with the exception of urgent safety and security information."

Last week, efforts to determine what aspects of operations at the Kingston Embassy were being affected were unsuccessful as calls, and emails to the Public Affairs Section, the press and information arm of its operations, went unanswered.

A notice on the embassy's website indicating that updates would be restricted because of the partial government shutdown was its only comment.

But reports in the US media indicate that only persons considered vital to national security and the safety of human life would be required to work at its embassies around the world.

The Washington Post has reported that the shutdown is having a major effect not only on who goes to work, but also on what work gets done at the embassies.

"The State Department, for example, said it will keep issuing passports and visas - although it warned that such activities 'will remain operational as long as there are sufficient fees to support operations'.

"But some other services will not be provided, which can have unexpected consequences," reported The Washington Post.

Many of the State Department's roughly 75,000 employees are employed in US embassies abroad, and since the department is America's leading foreign-relations agency, it could also delay any formal discussions with the Jamaican government.

The shutdown could also have implications for humanitarian assistance and foreign aid to Jamaica.

The USAID website has been shutdown, with the agency indicating that "due to the federal government lapse in appropriations, we are not able to update or maintain this website at this time. As a result, you may experience some reduced functionality".

The policy means no new funding commitments or obligations can be made during a shutdown, except to protect life and property.

"Further restrictions may have to be implemented if the shutdown continues and current funds become insufficient," the USAID further warned.

The partial government shutdown has been caused by an impasse over President Donald Trump's proposed wall on the Mexican border.

Trump is demanding US$5.7 billion to fund the wall but Democrats say the wall, would be ineffective. They offered $1.3 billion to continue current border-security funding. With neither side appearing ready to budge, the standoff seems set to continue for some time.