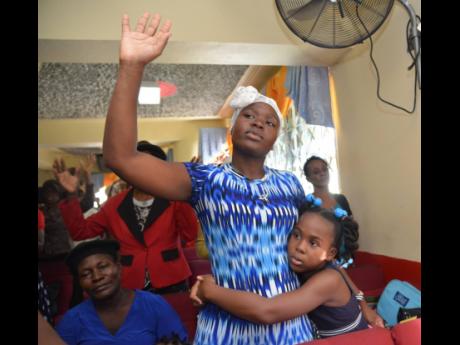 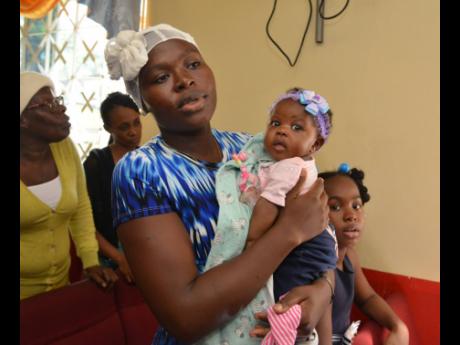 Kenyon Hemans
Japhene Campbell, mother of seven-year-old Benjamine Bair, who died in a freak accident at the Clan Carthy Primary School in Kingston earlier this month, worships with her daughters, eight-year-old Seraphine Bair and three month old Aareeba Williams, at the Temple of Praise and Home of Revival in Spanish Town, St Catherine, yesterday. 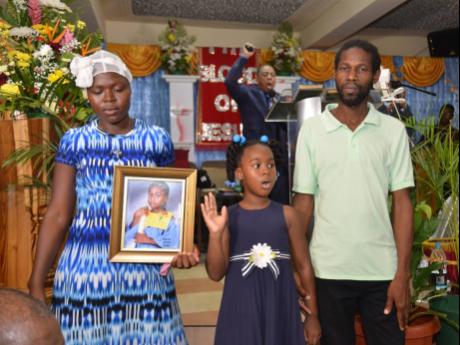 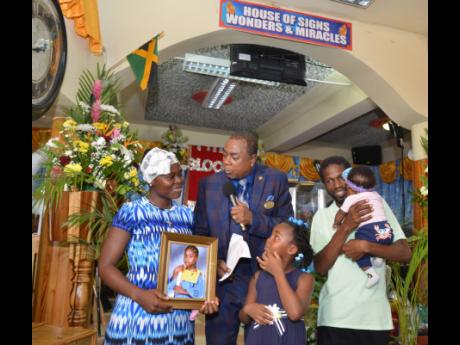 Kenyon Hemans
Pastor G.G Cooper (second left) prays for Japhene Campbell, mother of seven-year-old Benjamin Bair, who died in a freak accident at the Clan Clarthy Primary School, and her family, including daughters eight-year-old Seraphine Bair and three-year-old Aareeba Wiilliams, as well as Benjamin and Seraphine's stepfather Dwayne Williams, at the altar.
1
2
3
4

Church is one of the few places Japhene Campbell feels at ease long enough to smile since her seven-year-old son was crushed by a garbage truck at Clan Carthy Primary School in Kingston three weeks ago.

However, yesterday’s service at the Apostolic Church of God Seventh Temple of Praise in Spanish Town, St Catherine, was particularly difficult for her.

It was just three days since a post-mortem drove home the fact that Benjamin Bair, her “right hand”, was really not coming back home to her. He died horribly from multiple blunt-force injuries.

In addition to her grief, Campbell learned on Friday that the Ministry of Education, Youth and Information, and school authorities were not prepared to cover the full funeral expenses as she said she was previously promised.

Instead, the 28-year-old mother said the authorities offered only to pay for his storage fees, his coffin and a hearse. Her family would have to cover any other expenses for Benjamin’s send-off.

“That is unfair … . What I need is for them to give me my son back and they cannot give me my son back. None of them can pay me back for my son,” said Campbell, crying as she relayed how her heart sank during a meeting with representatives from Clan Carthy Primary last Friday.

“I took my son to school and left him in the care of the school, which I consider even safer than my home,” said Campbell. “Then I got a call that my son is dead, and right now they are telling me and my family that I have to dip in our pockets to deal with Benjamin’s funeral,” she added.

“My son died a horrible death and he deserves a send-off that is decent and proper, the same way I raised him like a little young man. This is unfair,” continued Campbell, listing the cost for funeral, transportation of mourners, and ninth-night, among the costs that the family is being asked to foot.

According to a relative, she and other members of the family are struggling to eat and sleep at nights, as the horror of Benjamin’s untimely passing on October 28 remains a dark cloud over their lives.

Last Friday, Sheldon Richards, principal of Clan Carthy Primary, told The Sunday Gleaner that the school was doing everything to assist the family as the institution copes with a dark period in its history.

Since the new school year in September, at least four parents of children at the school have died tragically, Richards said. Two died of natural causes while the others were shot and killed.

“There is nothing that can be said that will in any way console me after losing my student. This is a struggle, the likes of which we have never prepared for nor imagined,” said Richards last Thursday.

“It is through grace of God that I’m able to come on the compound, hold my head up, and keep fighting,” he continued, noting that Benjamin was the second of two students who died in his seven years as principal.

The other child was Tessanique James, a grade-five student, who was hit as gunmen traded bullets in her west Kingston community in August 2013, he said.

“We acknowledge her (Campbell’s) request and I will speak to my superiors about it. At this point, however, Clan Carthy is doing everything it can to address the needs,” Richards said, noting that the institution is willing to lend assistance towards Benjamin’s funeral.

He said the school remains in communication with the ministry over the matter. However, The Sunday Gleaner was yesterday unable to make contact with ministry officials.

Last week, students from Clan Carthy as well as others from neighbouring institutions continued to mount postcards, roses, toys, stuffed animals and other tributes to a memorial vigil for Benjamin on the school compound.

As they did, teachers looked on in grief at the broken-down fence metres away where the garbage truck reportedly overturned, crushing the child.

The driver of the truck, who police identified as Alten Brooks, 52, later turned himself in to the police, and is to be brought before the courts on January 15. It is reported that the director of public prosecutions has moved the case into the ambit of the Circuit Court.

“He (God) will answer in the midst of your grief and setbacks. Have faith, God is by your side and we are going to come out alive,” he said to shouts of worship from the congregation.