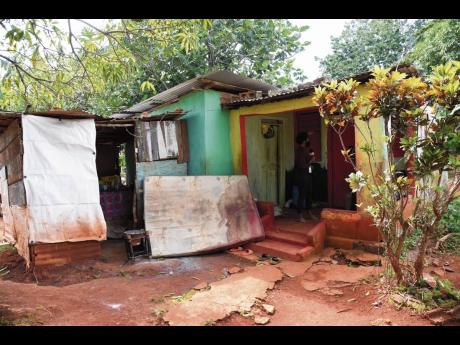 Ian Allen
The scene of a predawn shooting in the quiet rural community of Planters Hall in Old Harbour, St Catherine, on Friday that left four people dead.

A predawn shooting in the quiet rural community of Planters Hall in Old Harbour, St Catherine, on Friday has robbed 18-year-old Rosheda Nixon the opportunity of having her favourite uncle at a planned pre-Christmas family get-together.

The teen, who is studying business management, told The Sunday Gleaner that the incident also robbed the family of two brothers and the pregnant girlfriend of one of the brothers, who would have been the ‘life’ of their pre-Christmas family event.

The family get-together was cancelled, as Nixon and other family members try to make sense of a tragic event that will forever be a reminder to them in years to come.

Nixon’s uncle, Lester Harvey, was killed alongside his cousin Omar Wright and his girlfriend Nardia Thomas at their home. Richard Wright, another cousin and Omar’s bigger brother, was also killed at a separate location.

“The killing of Uncle Lester has left me and three other nieces in a bad space. He is our favourite uncle, never trouble anyone, always humorous,” Nixon said while keeping back tears, and simultaneously showing a video recording on her cell phone of him dancing on election night.

“He is a very hard worker who loves his two children and would always make sure they are well taken care of. Even if they (gunmen) did come for somebody else, they shoulda let Uncle Lester live.”

Nixon, who lived next door to her uncle, said the family had planned the pre-Christmas get-together for Friday and her uncle was planning to wake up and go for his daughter, who was spending time elsewhere, but the ill-fated predawn tragedy robbed him of that opportunity.

“He was planning on waking up at 8 a.m., pick up his daughter for the Christmas get-together and take her to buy her present, because he loves to purchase things for his children,” she told The Sunday Gleaner.

“Words cannot explain how we feel. He didn’t deserve to die like this. If he had to die, we would have preferred if he had died of natural causes. The entire community is in mourning; nobody here will have a good Christmas, he will be missed by everyone in Planters Hall.”

The niece said the gunmen weren’t sure which of the houses her uncle was in because they first came to her house that adjoins her uncle’s and was banging on a side door, but because the house has steel bars they could not get in and her mother told her not to open the door.

According to her, the men left and went next door to Harvey’s house, and that is when she heard the door kicked in and loud explosions pierced the silence of the morning.

“We called the police after the shooting stop and also requested an ambulance and they told us it wasn’t necessary because by the time they get to us the victims would be already dead, if they weren’t dead as yet,” Nixon further disclosed.

According to police reports, six gunmen went to the Planters Hall community at about 1:30 a.m. Friday and kicked in the door of the two-bedroom structure Lester Harvey, 49, shared with his cousin Omar Wright, 27, and his 18-year-old girlfriend, who was said to be pregnant, and opened fire, killing all three.

The gunmen then went across the street to where Omar’s bigger brother Richard Wright lived in a one-room wooden building, announced themselves as policemen, called him out and shot him. He died on the spot. No motives for the killings have been established.

When T he Sunday Gleaner visited the scene, the blood-soaked mattress Harvey was sleeping on when he was shot leaned against the house, depicting a true picture of the brutality that Nixon’s uncle suffered.

Nixon said it was just unbelievable that she would never have her uncle for another family get-together, and that this memory would always dampen the Christmas spirit.