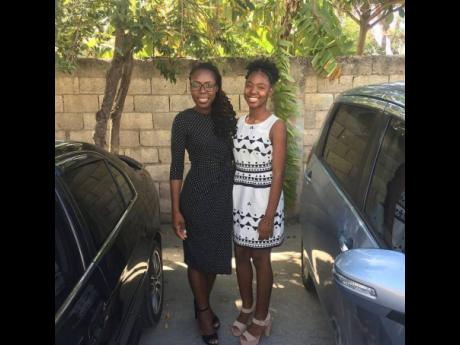 Six months after her dreaded discovery at age 15 gave way to a bouncy baby girl, Tenuke Doyley made a sacrifice no mother decides on easily – giving up her beloved child.

“I was moving from place to place at a whole heap of people’s yards, and the onus was on me to try to figure out my life because it just wasn’t making sense. At the time, I was living with my aunt, and it was a situation where you lived there, but you were basically on your own,” she said.

“So at the time, everyone had to fend for themselves, and I had a man who was providing for me, and I just figured that once you are taking a man’s things, he is going to want sex, and I just conditioned my mind for that,” said Doyley, explaining her lonely, directionless childhood in Trench Town, Kingston, prior to her pregnancy.

Doyley only met her dad a few years ago, at age 26, and after sustaining lifelong burn injuries in an accident that left her mother hospitalised for several years, the woman was in no condition to provide for a teenage daughter physically or emotionally at the time.

“That’s how she (daughter Danielle Cox) came. At first, I was thinking about getting rid of her, but I just didn’t know how I would have done that. I remember it was the September before I had to go back to school. I didn’t go in and the guidance counsellor came hunting for me. She left a message at the Trench Town Fire Station and they sent for me,” she recalled, now laughing in amazement of the counsellor’s resolve to locate her at the time.

“I remember she came to the house and was devastated. She said, ‘You can’t stay here’. She spoke to people from Food For The Poor, and that’s when I was placed in a home,” said Doyley. “That is when some sort of structure and normalcy came into my life.”

But that normalcy meant Doyley had to turn over her newborn to the State, and she dreaded the baby growing up in a children’s home. That is when she asked ‘Aunty Lorna’, an older church sister who was without children, to take the baby. Aunty Lorna agreed and soon after, the adoption arrangements were made official.

That was 18 years ago, and although Doyley is now the mother of a nine-year-old daughter, the pain of giving up her first child still tugs at her heart, albeit not as much since she was allowed full access to her.

“It was painful. As a teenager, I was just trying to understand life for myself, and I was constantly worried about what would happen in the future. That is where I was.

“I didn’t grow her, but she knows I’m her mother and loves me without end. But in my mind, I just came to understand that my position as her mother had to be on the back burner because I needed to get my life together, too. Aunty Lorna gave me an opportunity to do that – a second chance to fix things. I can’t believe that people can love other people’s children like that. I’m baffled as to how much love she shows her,” Doyley told The Sunday Gleaner.

Doyley later finished her schooling at The Queen’s School before moving on to complete a media degree with honours at the University of Technology.

Though their mother-daughter bond is not as strong as she would have liked, Doyley and Danielle’s relationship has endured despite their trying history.

“It could have been worse. Maybe I couldn’t have been in her life if she had gone to Maxfield Park Children’s Home or if I had decided not to carry her into the world,” said Doyley, “so we don’t beat ourselves up over it.”

Now, Danielle is in lower sixth form at Immaculate Conception High School for Girls. Her mother claims that like her, she is doing excellent in academics and would one day want to study journalism.

“She is an amazing human being,” Doyley gloated last week.