‘I want him to have the same freedom I have’ 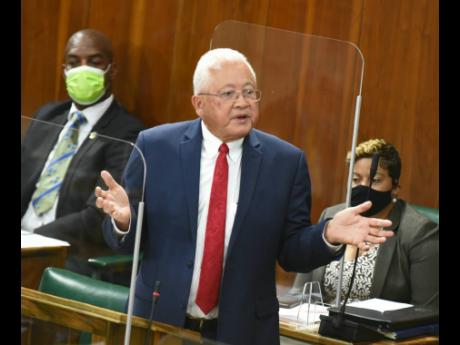 Kenyon Hemans/Photographer
Justice Minister Delroy Chuck delivering his Sectoral Debate presentation in Parliament on May 4. Chuck said that expungment applications have been crowded out by the processing of police records for overseas-bound farm workers and employees in the BPO sector. 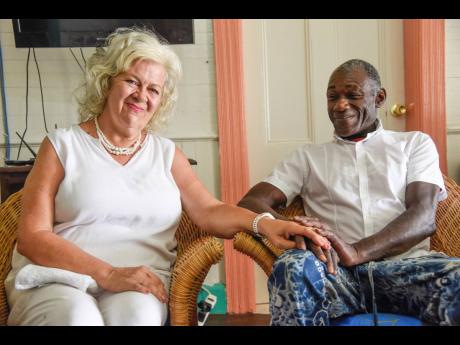 Nicholas Nunes/Photographer
Patricia Trainor is seeking expungement for her common-law husband, David Hamilton, which will allow him to travel with her to Canada to meet her family.
1
2

A Portland carpenter who says he was framed twice and ended up spending eight months in prison 30 years ago is now seeking to have his records cleared, but is lamenting the near year-long wait for a response to his expungement application. David...

A Portland carpenter who says he was framed twice and ended up spending eight months in prison 30 years ago is now seeking to have his records cleared, but is lamenting the near year-long wait for a response to his expungement application.

David Hamilton, 52, was convicted of housebreaking and larceny in May 1986 and was sentenced to one year in prison, suspended for three years. Nearly two years later, he was found guilty of receiving stolen property and sentenced to 12 months in prison.

Years later, in 1996, he was arrested and charged for having a ganja spliff and was fined. (Possession of less than two ounces of marijuana has been decriminalised in Jamaica since 2015.)

Hamilton’s case is being championed by Patricia Trainor, his Canadian common-law wife, who is seeking to wipe his slate clean in order for him to travel to Canada to meet his in-laws and enjoy his partner’s country. Hamilton is also due for hip-replacement surgery, which he wants to undergo in Canada for free if he receives residency status.

The 64-year-old retired teacher told The Gleaner that she had submitted Hamilton’s expungement application to the justice ministry in May 2020. To date, the couple said they have not received a progress update.

“They say it takes a year, but we applied a year ago, ... and when I call them, they say they’re waiting on the police record. But when I talked to the police, they’ve investigated and they’re saying, Ministry of Justice never sent a request.

“But the Ministry of Justice says they sent one on June 5, 2020. Well, that’s a long time ago. How come nobody’s looking into anything?” Trainor asked.

Justice Minister Delroy Chuck has been a vigorous lobbyist of expungement, which involves the formal removal of a conviction from an individual’s criminal/police record after a specific period of time has elapsed.

In his Sectoral Debate presentation earlier this month, he insisted that certain sentences should be expunged “if they have served their time, paid their dues ... after 10 years or 15 or 20 years”.

But that advocacy is cold comfort for Trainor, who stressed that it was not fair for Hamilton to live the rest of his life with the convictions hanging over his head, thus hindering plans for him to travel and ultimately seek to become a Canadian citizen.

Hamilton told The Gleaner that in the midst of Hurricane Gilbert in 1988, he and friends went in search of food. One of them, he said, found a suitcase with T-shirts from the Trident Hotel store and decided to take it, despite being urged not to.

After going home and falling asleep, Hamilton said he was roused by the police at his premises. Hamilton said that his friend had departed while he slept, leaving the suitcase behind.

Despite his claim of innocence, Hamilton said he was prosecuted. Hamilton alleges that his friend never confessed to his innocence even though he, too, was arrested and sentenced.

In the other case, he said he was riding a motorbike in Port Antonio when a man, who purporting to be a security guard, pleaded with him to transport him to his workplace to pick up gear.

Days later, he said he was arrested and again convicted, despite maintaining his innocence, after it was found out that the man had stolen goods from the premises.

‘Let him live in peace’

However, Trainor said her partner should not have to continue to suffer for the perceived injustice he faced in his youth.

“Everything that happened, those were all unjust charges, and it shows you how justice is not done for a poor person who can’t afford a lawyer, and so all these years later, his record should be expunged. That’s all we ask. Let the person live the rest of his life in peace,” she said.

Chuck told The Gleaner that while expungement is a privilege and not an entitlement, a number of applications have been delayed owing to a backlog at the Criminal Records Office (CRO). Without the police record, the application cannot be processed.

The minister said the CRO has been overburdened with police record applications, primarily from farm workers and employees in the business processing outsourcing sector, which has resulted in a suspension of same-day services.

However, he said the justice ministry would be collaborating with the national security ministry in a bid to improve processing.

Trainor’s frustration has been exacerbated by a snafu when she had sought a police certificate in 2019 for Hamilton to facilitate a conjugal spousal application for him to become a Canadian citizen. After months of delay and travelling back and forth between St Mary and Kingston, she was issued with a letter instead of a certificate, derailing those plans.

Hamilton, in the meantime, is pleading for a second chance and does not want to be treated like a murderer.

“I’m enjoying my life here, very much. I love Jamaica, but we definitely want to have a choice to go back and forth,” said Trainor.

“I want him to become a Canadian citizen so he can travel and can access our healthcare system, which will help him with his hip replacement.”

The operation, she said, would cost $2 million here.