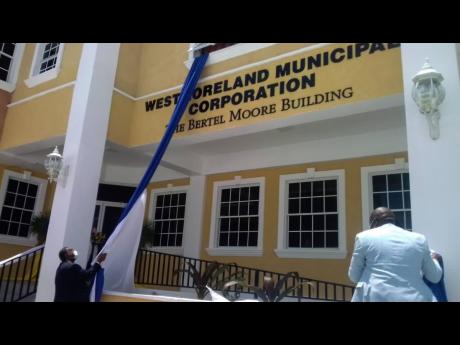 Photo by Hopeton Bucknor
The Bertel Moore building, headquarters of the Westmoreland Municipal Corporation, was unveiled on Thursday. 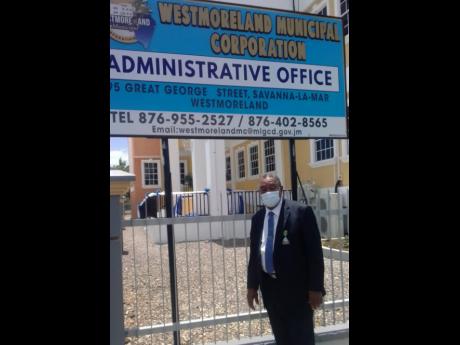 WESTERN BUREAU: A rift has widened in the Westmoreland Municipal Corporation (WMC) over the naming of the newly unveiled headquarters after the sitting mayor, Bertel Moore, who has scoffed at detractors and insisted that they had no right and power...

A rift has widened in the Westmoreland Municipal Corporation (WMC) over the naming of the newly unveiled headquarters after the sitting mayor, Bertel Moore, who has scoffed at detractors and insisted that they had no right and power over the decision.

That divide was evident on Thursday as invited representatives of the ruling Jamaica Labour Party (JLP) did not turn up for the official unveiling.

Except for George Wright, the controversial independent member of parliament for Westmoreland Central, the function was attended by only persons aligned to the Opposition People’s National Party (PNP), which has majority power at the WMC.

“I gave invitations to all the JLP members of parliament and councillors to attend the opening of the building, and as you can see, only George Wright found it important to attend,” said Moore.

“When the motion was moved for the Westmoreland Municipal Corporation building to be named the Bertel Moore Building, the Jamaica Labour Party councillors were all in disagreement and some even showed visible signs of anger,” he added.

The mayor further stated that when the Ministry of Local Government was informed that the WMC had decided to name the building in his honour, a letter was dispatched by Permanent Secretary Marsh Henry Martin starting that the ministry was not in agreement with the decision.

According to Moore, the Ministry of Local Government cannot dictate to the municipal corporation.

While acknowledging that the local government ministry helped to fund the project, Moore said that the WMC, through his leadership, had raised a substantial tranche of the construction cost.

Moore recalled appealing in vain for additional help from the ministry to cover a shortfall of $18 million billed by the contractor.

Dawnette Foster, councillor for the Cornwall Mountain division and chairman for the Westmoreland Central constituency, did not respond to suggestions that the JLP representatives boycotted the ceremony.

“Is that so?” Foster asked, before hanging up her cell phone.