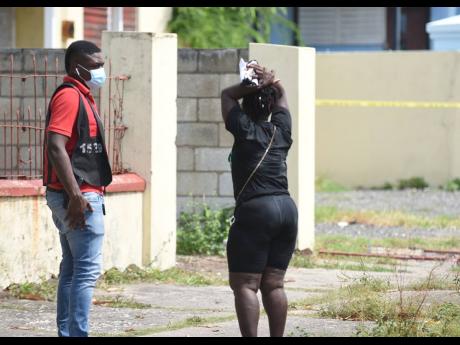 Kenyon Hemans/Photographer
A policeman looks on at the distraught niece of a 55-year-old woman who died in an arson attack on West Avenue in Kingston Gardens on Thursday. The fire started about 3 a.m. and quickly engulfed the house. Firefighters from York Park and Half-Way Tree put out the blaze. 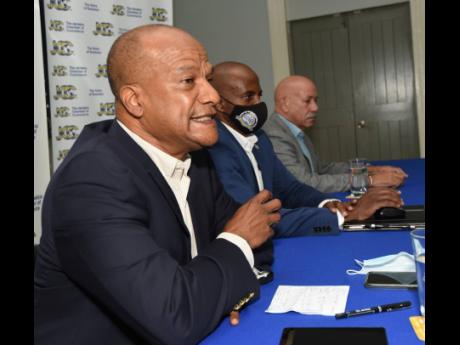 Pressure is mounting on the Holness administration to respond to a surge in violent crimes, with murders rocketing by eight per cent year-on-year.

The worrying trend comes as Opposition Spokesman on Crime Peter Bunting declared on Thursday that safety and security have not improved since the empanelling of the Crime Monitoring and Oversight Committee (CMOC), a group that tracks performance benchmarks of the Jamaica Constabulary Force.

As at July 29, there were 817 murders reported islandwide, 57 more than for the corresponding period in 2020. More granular analysis reveals an uptick in murders in nine of the 19 police divisions.

Bunting, a former minister of national security, also lamented the inability of the police to solve most murders.

“The deterioration has happened very quickly, really, since June, and the clear-up rate for murder in particular is 33 per cent. That is, one in three,” he said at CMOC’s press briefing at the offices of the Jamaica Chamber of Commerce, a week short of the anniversary mark of the initiative.

Chairman of CMOC, Lloyd Distant Jr, cautioned, however, that CMOC would not achieve its objectives overnight.

While noting progress on the score of social and community transformation, Distant expressed disappointment that many deliverables have not been fulfilled.

Distant revealed that 17 of 38 targets for the National Consensus on Crime have been completed.

One of the problematic police divisions, Kingston Central, which has seen a 52 per cent increase in murders and a 44 per cent rise in shootings, was again in the news on Thursday for murder and the second arson attack in 48 hours.

A 55-year-old woman died in the attack at 3 West Avenue in Kingston Gardens in the strife-torn zone.

The death house at West Avenue is located metres from the building that was razed by gunmen on Tuesday.

A police investigator, who spoke on condition of anonymity, informed The Gleaner that the woman perished after being trapped. The assault reportedly began at approximately 3 o’clock this morning.

She has not been identified.

Residents of Conrad Lane, which runs parallel to West Avenue, reported hearing a barrage of gunfire on Wednesday night around 7.

The niece of the deceased was at a loss for words as she walked around, hands on head, crying out for her aunt.

A family friend who lives in Kingston Gardens said that he was devastated, remarking, “Mi feel cut up.”

He described the deceased as “a friend, someone who you can relate to on a daily basis”.