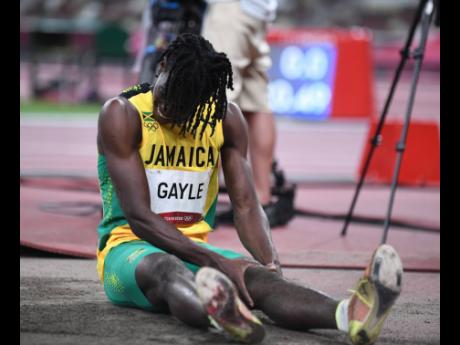 Gladstone Taylor/Multimedia Photo Editor
Jamaica’s Tajay Gayle holds his injured knee while competing in the men’s long Jump at the 2020 Tokyo Olympics in Japan on Saturday. He came 11th in the final. 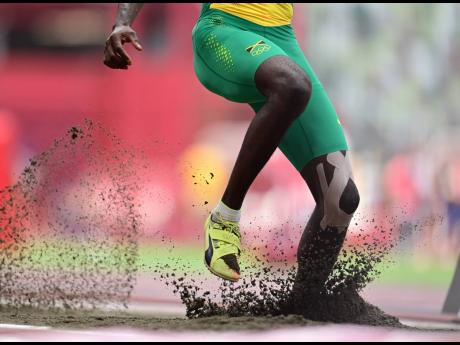 Gladstone Taylor/Multimedia Photo Editor
The heavily bandaged knee of Tajay Gayle, who was unable to advance to the top eight of the long jump final. 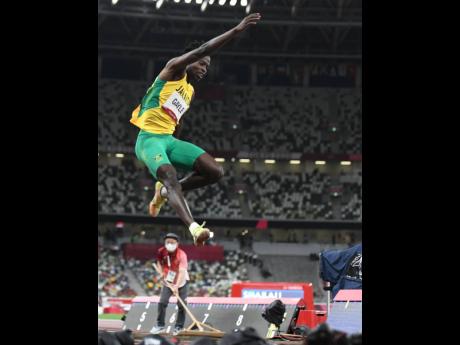 Gladstone Taylor/Multimedia Photo Editor
Jamaica’s Tajay Gayle flies through the air at the Tokyo Games on Saturday. Injury put him out of contention in the final. “What got me out here was the fact that I knew I could get on the medal podium,” he told The Gleaner.
1
2
3

Injury-plagued Tajay Gayle’s brave lunges for an Olympic medal at the Tokyo Games have been praised and questioned in equal measure.

But as far as the 2019 long jump World champion is concerned, taking the leap of faith despite a dodgy knee was one of the easiest decisions he has ever made.

Gayle, who is competing in his first Olympics, said that he was determined to give it a shot, having trained for one year for a bid at glory. And giving a coronavirus-weary Jamaica a medal on his birthday would have been a bonus during the nation’s Emancipation holiday celebrations.

“Training is hard, and I was never going to make the challenge stop me from doing what I want to do,” Gayle told The Gleaner after his only registered mark in the final, 7.69m, failed to get him into the top eight of the finale and into medal contention. He finished 11th overall.

The gold medal was won by Greece’s Miltiadis Tentoglou, with a last-gasp 8.41m, who prevailed in the countback over Cuba’s Juan Miguel Echevarria, who also jumped 8.41m for silver. Another Cuban, Maykel Masso, 8.21m, took the bronze.

Gayle suffered the injury on his very first attempt in the qualifying round and was clearly in pain throughout the competition. After receiving medical treatment after his second jump, Gayle, outside of the qualifying standards for the final, produced his best jump of the round, 8.14m, on his final attempt to book his ticket.

A subsequent MRI would reveal a Level One strain in his left knee, which led to questions over whether he would turn up for the final.

Turn up he did, with the battle armour of heavy bandaging on the injured knee, and despite each jump looking more painful than the last, Gayle completed his competition, fouling on the first two attempts before registering his 7.69m mark.

Gayle said he was determined to try and get one good jump in and fight for a medal for his country, but explained that a lack of rest, owing to constant treatment of the injury, also affected his performance in the final.

“What got me out here was the fact that I knew I could get on the medal podium, and Jamaica needed me,” said Gayle, who explained that the decision was made after discussions with his coach, who instructed him to make one attempt in the final. The other two jumps were fouls.

“This will not affect me in the future,” he said.

“... I’m very young. I have a lot more meets to go,” said the 25-year-old, who could barely walk after both rounds and who still had swelling in the area after the final.

He noted that he expected to recover and compete this season, and said that he is already looking forward to the World Championships in Eugene, Oregon, next year.

“I think it’s because of the painkiller why I am not feeling any pain right now, but maybe after, it will again be very painful,” he said.