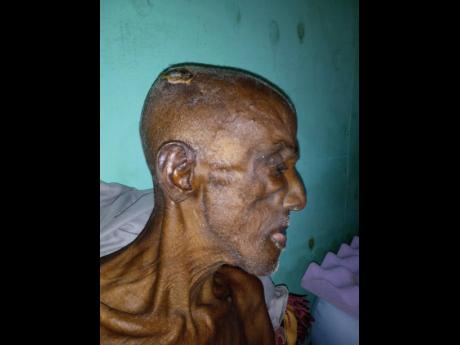 Contributed
Audley Miller shows injuries he reportedly sustained during one of his hospital stays before his eventual death on September 2. Cleon Miller said he was informed of his father’s death a week after his passing.

WESTERN BUREAU: Cleon Miller says he took his father Audley Miller to the Cornwall Regional Hospital (CRH) around 9 p.m. on Wednesday, September 1 after he fell ill and stayed there with him until about 3 o’clock Thursday morning. About an hour...

Cleon Miller says he took his father Audley Miller to the Cornwall Regional Hospital (CRH) around 9 p.m. on Wednesday, September 1 after he fell ill and stayed there with him until about 3 o’clock Thursday morning.

About an hour after the younger Miller departed, his 75-year-old father reportedly died of pneumonia at the Mt Salem, St James, hospital.

But Cleon Miller and his family were in the dark about the death for almost a week, the son has charged.

Cleon said he called CRH the evening of Friday, September 3 but did not get through and visited the hospital Saturday during his lunchtime but received no update on his father’s status.

The intervening no-movement days September 5-7, part of a series of coronavirus lockdowns geared at curbing the viral outbreak, prevented him from seeing his dad.

It was on Wednesday, September 8 that he got the gut-wrenching news from a doctor when he visited the hospital.

“We were not informed until one week later. I have records to prove that I called them at least two or three times a day for information on his well-being and they never told me that he had died,” Cleon told The Gleaner.

The senior Miller’s death has cast a new shadow on the hospital’s reputation, which has taken a battering since 2017 when a noxious fumes hazard forced the closure of its first three floors.

The complaint also adds to a mountain of grouses about treatment at Jamaica’s hospitals, including the high-profile deaths of Jodian Fearon on April 24, 2020, and Jalisa McGowan on February 26, 2021. Shanique Armstrong, too, alleged that medical staff watched negligently as she gave birth in extreme distress on the floor of an accident and emergency department. The newborn died.

Despite public pressure, the Dr Christopher Tufton-headed Ministry of Health and Wellness has not published or otherwise disclosed the full reports on those investigations.

That record of non-disclosure will add to the agony of Cleon Miller, who said his father had suffered traumatic care at CRH before.

According to Cleon, his father’s hospital troubles began when he fell ill in July and was admitted for what was then described as a low sodium level.

Audley Miller returned home with pain in his lower abdomen but was in and out of hospital up to August.

The son said that there were signs that his dad, a truck driver and father of four who resided in Flankers, had not been receiving adequate care.

“The last time they released my father from the hospital, he had bedsores in his head, a piece of his ear was torn off, and his foot was swollen,” said Cleon, adding that he had taken photos of his father’s condition.

While Cleon said the hospital has since made contact with him concerning the retrieval of the elder Miller’s body, he revealed that his siblings are not coping with their father’s death.

“I believe the hospital just wants to have it on record that they followed up with me. It is too late now,” said Cleon.

This alleged mistreatment of Audley Miller is the most recent black eye suffered by the CRH, which faced a similar accusation of neglect last May following the death of 66-year-old Hopeton Martin. Martin’s relatives had alleged that he was not given water and that his bedclothes were not changed.

The CRH has had a significant portion of its operations outsourced or scaled down since 2017 when a $3.5-billion restoration project got under way to correct, among other things, the noxious fumes saga that was affecting staff and patients.

Dr Delroy Fray, clinical coordinator for the Western Regional Health Authority, which has responsibility for the CRH, told The Gleaner that every effort is made to reach out to the surviving relatives, including making contact with the nearest police station to their residence.

“When a patient dies, you can see it in the patient’s docket where several attempts were made for the relatives to be called, and they never responded. You leave messages on the phone and the family never responds,” said Fray.

“Usually, when that happens, we pass the information to the hospital’s administrative department to track, and to see where is the nearest police station to where they live, in order that somebody can get in touch with them.”

The clinical coordinator has urged the family to write a letter to the hospital’s CEO. He said the claim would be evaluated to judge whether the complaint was justified.

“I will call them in and have a meeting with them, and even if it is not our fault, we have to apologise,” Fray said.

But as far as Cleon is concerned, nobody who seeks hospital care should have to go through what his father and family had to endure.

“A hospital is meant to help persons get better, not worse. The only persons who can say it is bad are the ones who have seen it for themselves,” said Cleon.

“I have seen and experienced it, and now I am even more afraid to go to the hospital gate, much less to go inside.”