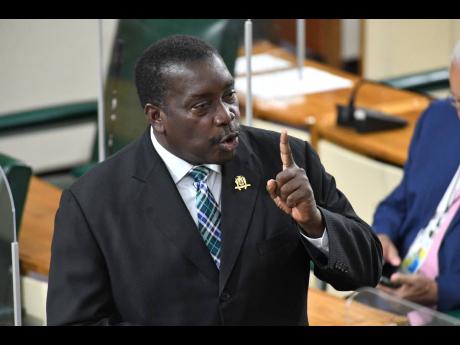 File
Though usually outspoken, Transport Minister Robert Montague has been uncharacteristically silent on the AAJ controversy.

Transport and mining ministry representatives were sidelined as the boards of the Airports Authority of Jamaica (AAJ) and a subsidiary decided on the first part of a $450m investment in First Rock Capital Holdings (FRCH), meeting records have...

Transport and mining ministry representatives were sidelined as the boards of the Airports Authority of Jamaica (AAJ) and a subsidiary decided on the first part of a $450m investment in First Rock Capital Holdings (FRCH), meeting records have confirmed.

It’s the latest revelation in the scandal on which the portfolio minister Robert Montague continues to be silent even amid news that boards answerable to him went against an initial recommendation not to invest taxpayers’ money in the start-up private-equity real estate company.

A “gravely concerned” Prime Minister Andrew Holness has also not commented since the latest series of Gleaner revelations that are based on board minutes covering the period January 2019 to June 2021.

Tanya Bedward, a senior director at the transport ministry, was named to the AAJ board in July 2018 and continued in the role up to November 2020.

The ministry’s representative on the board of the NMIAL Airports Limited, an AAJ subsidiary, was legal officer Julia Moncrieffe Wiggan, who served from May 2016 to 2020.

As the ministry’s eyes on the boards, they would likely have had to get the ministry’s position before voting on any investment decision but the minutes suggest that they may not have got the chance to discuss the issue with their bosses, including Minister Montague.

Both officials complained in meetings after the first set of shares were bought that they were not aware that a decision was taken to do so at a February 8, 2019, joint board retreat that they attended.

Bedward said at an AAJ finance committee meeting on March 19, 2019, that she was unaware that a decision was taken at the retreat to invest in First Rock although she knew a recommendation was made to adjust the AAJ Group’s investment policy which accommodated the share purchase.

She had also enquired whether ratification was required from the committee before the full board decision, to which the AAJ’s Senior Director for Finance Samuel Manning responded that the board always had the authority to make equity investments.

Bedward revealed that following the board retreat, a similar case came to her attention involving an entity that wanted to make an investment.

She explained that the entity first sought the approval of the finance ministry before going ahead, which was unlike what the AAJ and NMIAL did in breach of the law.

Manning later argued that although the AAJ Act said investments may be approved by the finance minister, “none of the government institutions follow this strictly by the letter of the law”, the minutes said.

It was a similar issue for the NMIAL board, as Moncrieffe Wiggan insisted at an April 10, 2019, board meeting that the records should not indicate that the decision to invest was made by the board.

“Reference to the board should be corrected to indicate that only some members of the NMIAL bard provided approval,” read a copy of the minutes.

She also argued that investment proposal should have been considered at the NMIAL’s board meeting which was held on February 6, 2019, a day before retreat started.

The then NMIAL’s finance committee chairman Kent Gammon had also complained that he was at the retreat but was never involved in the decision-making process.

Moncrieffe Wiggan has declined to comment on the issue.

The AAJ said a “majority” of both boards authorised the investment of $500,000 per agency into the St Lucia-registered First Rock, which started operations in March 2019 and listed on the Jamaica Stock Exchange the following year. Approximately US$2m worth of shares were acquired in a January 2020 IPO.

Moncrieffe Wiggan was among those who approved the second investment, while Bedward was recorded as absent.

The AAJ board considered a recommendation in January 2019 not to invest in First Rock because of the company’s “limited financial and operational history” but went ahead anyway, even with the company meeting only one of six eligibility criteria.